The Autumn Colours Classic is one of the most prestigious short track events anywhere in the country. This year’s 25th edition – October 6th through 8th at Canada’s Toughest 3rd of a Mile Paved Oval – will welcome over 10 different racing divisions. Sunday, July 2nd drivers in the Battlefield Equipment Rental 4Fun, Jiffy Lube Mini Stock, Thunder Car and Organics & Glass Late Model classes locked-in the front row starting spots during the Chase for the Colours Pole Qualifier. 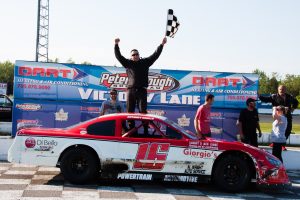 Feature race action got underway with a 40 lapper for the Thunder Cars, as James Townsend and Fedele DiBello brought the field to the Great Canadian RV green flag. Townsend took control of the field early and the pack began to work through lapped traffic with just 10 laps on the board. Anthony DiBello wrestled the top spot away on the 12th circuit, with invader Carson Nagy mounting a hard charge. Nagy’s run came to an end when the #63 machine suffered mechanical issues and crashed in turn 3. The incident also collected Kris Allard, who was running 3rd. DiBello would lead the rest of the way and survived a pair of late cautions to take the win over Dan Archibald, Bailey Jacobs, Townsend and Tyler Bouillon. 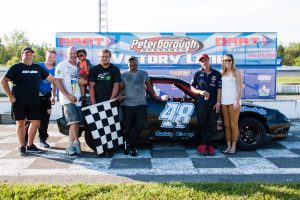 champion – took the early lead and had a 6-car length advantage by the time there were 12 laps on the board. By then, Kris Khan had moved into second spot, with infiltrator Johnny Paradzinski mirroring his every move. Khan took the lead on a lap 16 restart and his teammate James Townsend claimed second with 27 laps complete. The top 3 broke away from the field over the closing stages, as Khan took the win over Townsend and Paradzinski. Kevin Strutt and Junkin chased the lead trio across the line. 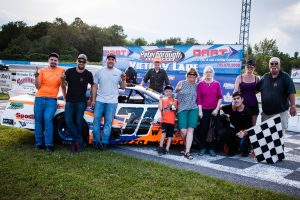 With Jack Horner and Bryan Mercer on the front row, the Organics & Glass Late Models came to the line for a 60-lap feature that would determine the front row starting spots for the 25th running of the Autumn Colours Classic. The inside line moved away quickly, with Mercer being shuffled back to 5th before he could get a spot in the preferred racing groove. A lap 8 yellow flag slowed the pace, with reigning Late Model track champion Rick Spencer-Walt – who now calls Sunset Speedway his home track – taking the lead on the restart. The #31W machine would survive a number of late race cautions and a challenge from Ryan Kimball – another former track regular – for the win. Amanda Balson, Dan McHattie and Mercer completed the top 5.

Keith Parkes and Jeremy Kelly paced the Battlefield Equipment Rental 4Fun starting grid to the stripe to close out the feature race action. From the 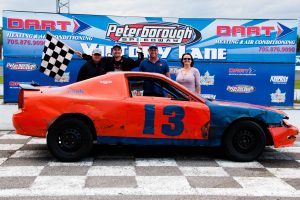 drop of the green flag, Kelly took the lead in the 30-lap affair that saw the leaders catch the tail end of the field with about 10 circuits on the scoreboard. Griffin Powell – a former Autumn Colours champion – would steal the lead from Kelly on lap 18 and held the spot the rest of the way. Jake Kelly followed the race winner and his brother across the line, with Parkes and Malcolm ‘Pops’ MacDonald in 4th and 5th respectively.

Bullring bullet points: Dale Lyons of Norwood, Ontario won $608.00 in the day’s 50/50 draw…Former track champion Tyler Junkin took over at the controls of Donovan Price’s #96 Mini Stock for the day…A brief rain shower put things behind schedule for about 45 minutes, but a solid effort by track drying crews got things back underway. A second round of rain – expected later in the day – had failed to arrive by the time the final checkered flag fell…Brad Lavalle’s freshly painted and lettered #06 Thunder Car received heavy damage in a front stretch wreck during the second round of qualifying. The driver was uninjured…The 5th place Thunder Car main event finish by Tyler Bouillon was the best of the young racer’s rookie season so far.

Canada’s Toughest 3rd of a Mile Paved Oval returns to action Saturday, July 8th with the year’s second Summer Toonie Night, presented by Pepsi. The Battlefield Equipment Rental 4Fun, Jiffy Lube Mini Stock, Thunder Car, Organics & Glass Late Model and Eastern Ontario Legend divisions will be on the card. For the Legends, it will be a National Qualifier with 3 guaranteed starting spots for an October event at Las Vegas Motor Speedway up for grabs. Racing will start at 5:00 and general admission grandstand tickets are just $2.00.

Full schedule details and the latest news can always be found by logging onto www.peterboroughspeedway.com, liking the Peterborough Speedway page on Facebook or following the track on Twitter. Fans can also download the free app on their Smartphone.