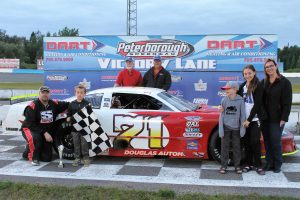 Canada’s Toughest 3rd of a Mile Paved Oval wrapped-up another month of its 2018 schedule – Saturday, July 28th, under a full moon – with an exciting night of action, featuring the hometown Battlefield Equipment Rental Bone Stock, Jiffy Lube Mini Stock, Super Stock and Late Model divisions; along with the Trailers Plus Ontario Legends Series.

Feature race action for the night got underway with a 30 lapper for the Late Model division, with Mark Gordon and Dan McHattie on the front row. McHattie took the lead from his outside line starting spot and pulled away from the pack. The veteran campaigner from Cavan, Ontario began putting backmarkers a lap down with just over a handful of laps complete and quickly built-up an advantage of nearly half a track. James Horner – who has been having a strong season – moved into the runner-up spot just past the halfway mark, with Amanda Balson coming-up fast. Try as they might, no one had anything for McHattie in the caution-free affair. Balson, Horner, Chris Mitchell and Gordon rounded-out the top 5.

For the Super Stock ‘A’ main, Mark Gordon lined-up alongside Tim Burke for the Great Canadian RV green flag. Gordon took the lead early, with 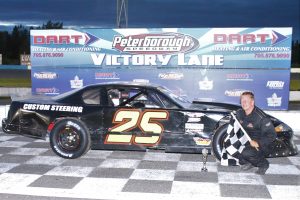 Marlie Owen taking 2nd. As the leader moved-out to a strong, 10-car length advantage, Rob Richards claimed the runner-up position. Lapped traffic came into play with about 7 laps on the board and Tim Burke grabbed the 3rd spot a lap later. A late race yellow flag shuffled the deck and gave everyone a last shot at Gordon. The driver of #25 machine was strong enough to hold-off the charge and took the win over Burke, Bailey Jacobs, Richards and Dan Archibald. 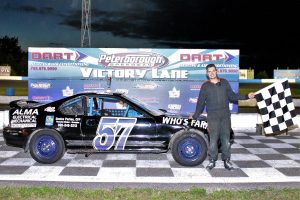 With 20 laps to settle the score, Alex McGibbon and Corey Strawn brought the Battlefield Equipment Rental Bone Stock field from the staging area for their feature tilt. McGibbon led through the early stages and caught the tail end of the field with 6 laps showing on the scoreboard. A 3-wide move going into the tight 3rd turn got everyone’s attention, as Ryan Oosterholt used the outside line to take 2nd with 10 complete before moving to the lead a couple of circuits later. A pair of late race yellows bunched the pack, but it was another win for Oosterholt. Rob Crick, Chris Tubman, Corey Strawn and Jake Kelly completed the fast 5.

In addition to his feature win, Oosterholt had a pair of Bone Stock qualifying event victories. Jeremy Kelly, Crick, Strawn and Dave Feeney had the others.

Kevin Foisy and Shane Pollack led the way for the Trailers Plus Ontario Legends 25 lap feature. Foisy got a jump on the green flag and had moved out 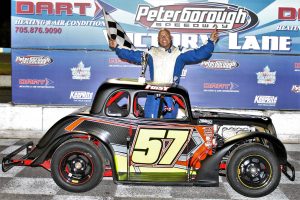 to a commanding lead with less than a handful of laps complete. He started putting backmarkers a lap down by lap 8. Defending series champion Matt Haufe moved into 3rd spot with 9 circuits on the board and took the runner-up spot 3 laps later. The show’s first yellow flag – for a front stretch issue on lap 15 – bunched the field. On the restart, Haufe was glued to Foisy’s back bumper, but a number of late race caution flags couldn’t delay the inevitable as Foisy claimed the win. Adam and Wesley Cuthbertson followed Foisy to the line. Terry McClelland and Mark Griffin completed the top 5.

Foisy added a pair of Ontario Legends heat wins to his night’s work. Andre Fiorini and Haufe had the others. 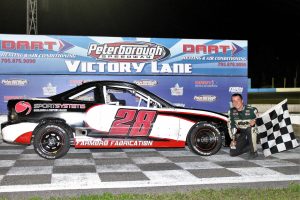 George Novis and Ember Junkin paced the pack of Jiffy Lube Mini Stock runners to the line for a 20 lap feature dance. Nolan Gould moved into 2nd with only a few circuits complete and took the lead a lap later. The #28 ride caught backmarkers and began working through traffic at lap 9, but a yellow flag for an incident in the 2nd turn at lap 14 slowed his charge. Gould remained in control on the restart and held-off a hard-charging Ryan Oosterholt for the win. Kevin Strutt, Ember and Marilyn Junkin completed the top 5.

Oosterholt picked-up a couple of Mini Stock qualifying round victories, with Gould and Ember Junkin also finding their way to the winner’s circle.

All feature event finishing positions are unofficial and subject to scoring review, as well as post-race safety and technical inspection.

Bullring bullet points: Track officials announced a change in the posted schedule for the August 11th show with the Lucas Oil Sportsman Cup Series. All advertised times have been moved-up by an hour. Pit gates will open at 1:00, with grandstand admission at 4:00 and racing at 5:00…The 50/50 draw – in support of the Millbrook Legion – was won by Sean O’Grady of Harwood, Ontario who took home $625… Rob Robinson made his 2018 Peterborough Speedway debut in the #4 Late Model machine, with Kenny McNichol Jr. doing the same in the #17M Ontario Legends ride. Dave Marco joined his son Ethan in the Bone Stock ranks, while Alex Lees returned to the Mini Stock field with a 6th place finish.

The 2018 Hot August Nights Series gets underway Saturday, August 4th with the OSCAAR Modifieds and Pro Midgets joining the hometown Bone Stock, Mini Stock and Super Stock divisions. There will also be a Pre-Race Corn Roast. Pit gates open at 2:00, with spectator grandstands unlocked at 4:00 and racing at 6:00.

Check www.peterboroughspeedway.com or look to the track’s social media platforms for the latest news and schedule updates. There is also a free app available for Smartphone users.