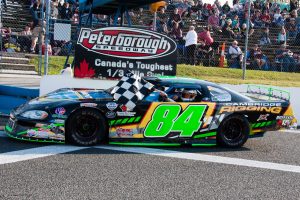 Mother Nature might have tried, but her efforts to threaten the second day of the 25th Autumn Colours Classic – presented by Lucas Oil Products – failed as action rolled to the line Saturday, October 7th at Peterborough Speedway with only a slight delay. 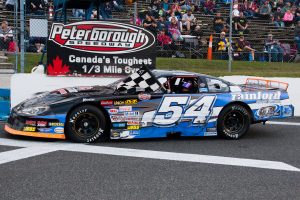 OSCAAR’s Pro Midget division hit Canada’s Toughest 3rd of a Mile Paved Oval for a 25-lap feature tilt, with Jordan Hanna and Daniel Hawn on the front row. Hawn jumped out to an early lead and started to work through the slower traffic with 9 laps complete. Not even a caution flag for an incident on the front-stretch would keep him from the win. Hanna, Ted Greenfield, James Stanley and Craig Pritchell rounded-out the top 5. Hawn collected an extra $500 from an anonymous sponsor in victory lane. His second-place finish was enough to clinch the 2017 Pro Midget championship for Jordan Hanna.

The Outlaw Midget 25-lap feature brought a field of 13 starters to the line, with Zack Millman and Nigel Buttivant on the front row. After a quick yellow flag produced the need for a complete restart, Jessica James moved into the top spot. A yellow flag for a 2-car incident on the front-stretch slowed the pace, but James wouldn’t relinquish control on the restart. A lap 15 spin in the 3rd turn collected 3 cars and produced a red flag. All drivers were checked on the scene and were unhurt. James parked the #2 machine in victory lane, with Paul Draganac, Brent Kemps, Nigel Buttivant and Owen Elliott completing the top 5.

The Trailers Plus Eastern Ontario Legends Series wrapped-up the second night of Autumn Colours action with a 15-lap trophy dash. A few yellow flags and some discarded body parts kept officials hopping, but didn’t delay a win by Chuck Hopkins, who led only 1 lap – the last one – to take the win.

Bullring bullet points: Taking home the winner’s share of $850.50 in the 50/50 draw was Paul Anderson of Bridgenorth…The opening lap the first Eastern Ontario Legends heat race was a rough one for Cole Ledson and Miles Tyson, as the pair came together entering the first turn. Ledson made hard contact with a retaining wall outside of the track’s surface and his #14C machine was too damaged to continue. Tyson’s crew was able to get the #49 ride back on the track for the second round of qualifying.

Feature events – with a green flag scheduled for around 12:30 – will highlight the Sunday portion of the 25th annual Autumn Colours Classic, with a 50 lap Thunder Car feature first on the schedule. Full details can be found by selecting the ‘Autumn Colours’ dropdown menu at www.peterboroughspeedway.com, checking the track’s Facebook page or Twitter feed.