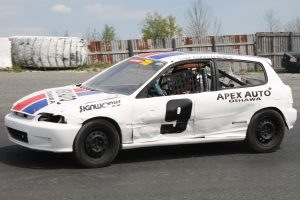 Some racers will tell you there’s nothing wrong with second place, while others say they’re always looking for the win. Sean Kennedy has won his fair share of feature events in Peterborough Speedway’s Battlefield Equipment Rental 4Fun division, but in each of the past 2 seasons, the hard-charger from Courtice, Ontario has owned the runner-up position in the final point standings.

As the venue known as Canada’s Toughest 3rd of a Mile Paved Oval gets ready to celebrate its first half century of action with the launch of the 50th Anniversary Season, the 21 year-old is ready to take care of some unfinished business.

“We’ve had some great runs over the years and I’m proud of everything this team has been able to accomplish,” Kennedy said. “Racing at this level is all about having fun and making friends, but I think the time has come to have my name engraved on the track championship trophy. And this would be the perfect time to do it. We’ve worked hard since the final checkered flag of the 2016 season and we’re looking forward to this year’s opening ceremonies to kick-off the new campaign.”

Coming from the karting ranks, where he recorded a number of event and class victories, Kennedy knows his way to the winner’s circle. Adding about a handful of stock car main event triumphs allowed the popular wheel-twister to maintain a high level of confidence, every time he rolls his #9 machine onto the race track.

“With close to 40 different teams in the field, our class is one of the most competitive at the track,” the driver said. “That can make gaining a spot in the main events kind of tough, but since short track racing rewards consistency, you have to choose your battles carefully. Its hard to get any points when the car is sitting on the trailer.”

Getting ready to enter his 3rd season of action in the 4Fun division at the tight, tricky bullring on Mount Pleasant Road, west of the Liftlock City, Kennedy and his parents Dave & Cheryl Kennedy Rachel Bolton are putting in some late hours to get their ride ready for the Saturday, May 20th season opener. When things get rolling for 2017, Sean Kennedy’s efforts will be proudly supported by Apex Auto – Oshawa, Signworks and Clarke Motorsports Communications. Fans can follow the team during the season by liking the ‘skracing’ page at www.facebook.com.