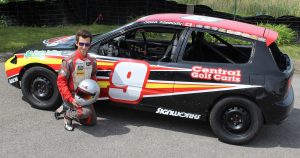 The latest crop of weekly short track racers is cut from a different cloth. They’re wise beyond their years with talent and experience you’d expect to find in drivers twice their age. They sharpen their skills at one level of the sport and then take the next step in their development.

Racing has become a way of life for Sean Kennedy. The 25-year-old from Courtice, Ontario has a resume that includes 7 years in asphalt go karts at a variety of tracks across the country and when the green flag waves to open the 2021 schedule at Peterborough Speedway, the likeable youngster will kick-off his 7th season in the track’s Bone Stock division. After spending last year on the sidelines, Kennedy says he’s looking forward to showing off a new colour scheme on his No. 9 Honda Civic, in honour of reigning NASCAR Cup Series champion Chase Elliott.

“COVID 19 has been tough on everyone so after running mostly white or black cars in the past, we decided to give our friends and fans at the track something bright and exciting to see this year,” said Sean Kennedy. “We took the idea to the team at Signworks Canada and they really knocked it out of the park. It’ll be great to get back to the track.”

Kennedy has been a proven winner throughout the different stages of his career, taking checkered flags in 4 and 2 stroke karts to go along with close to 30 qualifying heat race wins and 9 stock car feature race victories. He logged a hat-track of runner-up championship point finishes and was 3rd in 2019 overall standings. Like most racers, the driver has his sights set on a track championship and is looking for the best in whatever version the 2021 season will bring.

“Our plan is to run as many Bone Stock races as we can and be a strong representative for our sponsorship partners,” according to Kennedy, who is a Fleming College Frost Campus graduate. “So many people – including my parents and my girlfriend Rachel – have supported me over the years. I also owe a huge vote of thanks to Rachel’s parents Jim and Brenda Bolton, along with good friends Andrew, Jarah Massey and their family. Jeff, Cody and Debbie Fenton. Its always a lot of fun to come to the track and have such a positive group of people in my corner.”

Keep an eye on www.peterboroughspeedway.com or the track’s social media platforms on Facebook and Twitter for updates on the track opening for the 2021 season.