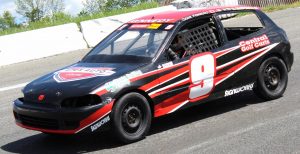 t the start of a new season, every racer in the field is in contention for the track championship. As time rolls on, the cream rises to the top and fans get to see the best of what everyone has to offer. After coming close to the Peterborough Speedway Battlefield Equipment Rental Bone Stock title several times in the past, Sean Kennedy is riding a hot streak that could very well see the Courtice, Ontario speedster take the seat of honour at the championship table.

Even with rainouts in a pair of the season’s 4 scheduled events, Kennedy’s No. 9 Honda Civic currently holds down 4th spot in the Bone Stock point standings, just 18 markers out of the lead. He’s scored a top 5 effort in back-to-back main events and also has a qualifying heat race win to show for his 2022 season. With the first of this year’s marquee events scheduled for Saturday, June 18th, the driver says he’s hoping to continue his current hot streak.

“At this stage of my career, I’m still racing for fun and the love of the sport,” explained Sean Kennedy. “Its always more fun when you can be on the track and show your stuff in front of a big crowd and all reports indicate the return of the APC Pro Late Model Series and Qwick Firestarter Super Stock Tour this coming weekend should lead to the biggest crowd of the season.”

While he’d like to pick-up a main event checkered flag, Sean Kennedy – a 26-year-old from Courtice, Ontario – knows that a series of strong, consistent finishes could prove to be just as, or even more valuable to the team as the season rolls on. Kennedy says he’d like to thank his parents Dave and Cheryl Kennedy and his girlfriend Rachel Bolton for their encouragement and support throughout his motorsports career.

The No. 9 team is proudly backed by Apex Auto – Oshawa, Sign Works Canada, Central Golf Carts, Strata Drilling Group and Clarke Motorsports Communications. Fans, family and friends can follow Sean Kennedy at the track or on the SK Racing page at www.facebook.com.