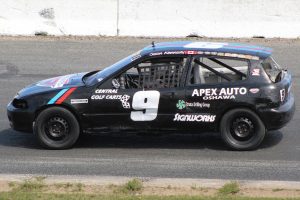 “I’ve always been confident in the things this team can achieve,” admitted the driver. “We never stop working. At the track and behind the scenes, we’re always thinking about changes we can make to the car. All it’ll take is a little racing luck and being in the right place at the right time to be able to put it all together.”

Like so many of today’s young racers, Sean Kennedy’s rise through the ranks began in go karts – winning numerous season and class championships – before making the transition to stock cars. Combined with the unwavering support of his family and friends, Kennedy’s calm, calculated driving style helped introduce the 24-year-old from Courtice, Ontario to a new legion of fans and paid-off with multiple trips to the winner’s circle for qualifying event victories and feature race checkered flags.

“Even from my early days in the sport, being at the track has always been a lot of fun,” said Sean Kennedy. “I’ve met some incredible people along the way. I’m very thankful to have had so many wonderful opportunities and made some life-long friends throughout the different stages of my career. I’ve received offers and the chance to do other things, but I can’t think of many places I’d rather be or anything I’d prefer to do. Every new race season is like a special Saturday night spent with my extended family.”

Heading into the first green flag of the 2020 season – Saturday, May 16th – Kennedy and the #9 team have been fine-tuning the ride that took the driver to last year’s 3rd place finish in the overall standings. They’re also looking to land some additional sponsorship support to join the perennial championship calibre program that during the 2019 campaign included Apex Auto – Oshawa, Sign Works Graphics, Sparta Drilling Group, Central Golf Carts and Clarke Motorsports Communications.