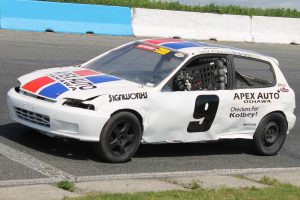 No matter where they race, every driver starts the season with a clean slate…a fresh canvas…an empty notebook. After finishing second in the Battlefield Equipment Rental 4Fun point standings each of the past 2 years, Sean Kennedy kicked-off the 2017 season at Peterborough Speedway with one thing on his mind. A track championship.

After winning a number of races and class championships at different levels during his tenure in the karting ranks, his prowess behind the wheel made a seamless transition when it came to stock car racing. With nearly 40 different teams making at least one start in the highly competitive field, the 20 year-old from Courtice, Ontario already has a pair of main event this year. The 4Fun division has about a handful of races left on the regular season schedule and while another main event win is far from guaranteed; it certainly isn’t out of the question.

“I’ve always believed in looking forward and while I won’t be point-racing, I know what’s going-on around me,” Sean Kennedy said. “I have to finish as close to the front of the field as possible to stay in the hunt, going into the stretch-drive. If everything goes according to plan, we’ll have a great end to the year.”

4Fun is the entry level class at the track known as Canada’s Toughest 3rd of a Mile Paved Oval and Kennedy has done his best to be on good terms with his fellow competitors. During the annual Chase for the Colours Pole Qualifier – Sunday, July 2nd – the driver of the #9 machine was running in a top 5 position when he pulled-off the track with less than 10 laps to go. Because he won’t be running the season ending Autumn Colours Classic, he didn’t want to be in the way of another driver’s chance to win.

A week later, he got caught-up in a multi car incident that caused the team some extra time in the shop, where they needed to replace some body panels, suspension components and even a few sponsorship markings to get the car ready for the next event on the schedule. And to show that the team had been successful in getting everything back together, after turning some fast laps during the pre-race practice, Sean Kennedy scored a runner-up finish – Saturday, July 15th – when the 4Fun division ran a 50-lap feature event. He says its all part of the short track racing experience.

“You have to be willing to take the good with the bad,” the driver admitted. “There will be ups and downs; highs and lows. Anything that happened to our team could’ve just as easily been an issue for someone else. We’re all happy to help each other out when the chips are down.”

Again this year, the #9 Battlefield Equipment Rental 4Fun Honda is proudly supported by Apex Auto – Oshawa, Signworks and Clarke Motorsports Communications. Fans can follow the team’s activity throughout the season by visiting the skracing page at www.facebook.com.