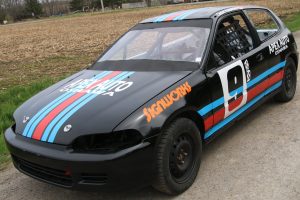 Any driver in the starting field will tell you the same thing. There’s nothing wrong with finishing in second place in the championship point standings. Sean Kennedy would agree, but the 22-year-old from Courtice, Ontario feels he’s earned the seat of honour at the season-ending award’s banquet. After racing his way to the runner-up spot in the title chase during each of the last 3 years, the talented youngster will look to get a solid start to the new schedule.

“We spent a lot of time during the winter, putting a new car together,” Sean Kennedy said. “Some of our original set-up notes should transfer to the new piece, but it’ll basically be a blank piece of paper when the season gets rolling. Opening night – Saturday, May 19th – is something every team in the pit area looks forward to. With free spectator grandstand admission, the place will be packed and it will be up to all the drivers to put on a great show.”

Even with Jeremy Kelly slated to return to the weekly wars in search of his 3rd straight championship, Kennedy’s #9 machine looks to be one of the early choices to earn the inaugural crown under the track’s new Bone Stock banner. While some racers might feel some extra pressure at the prospect of being picked as the pre-season favourite, winning races is nothing new for the former go-karter. And with the lid-lifter at the venue known as Canada’s Toughest 3rd of a Mile Paved Oval less than a month away, Sean Kennedy and his crew are logging some long hours to put the finishing touches on their equipment.

“Hard work and focus behind the scenes, combined with consistency on the race track can help pave the way to victory lane,” Kennedy said. “You can’t win every race but putting together a streak of strong finishes and finding some good racing luck throughout the year can put a driver at the top of the charts.”

Sean Kennedy would like to thank his parents Dave and Cheryl for their encouragement and the opportunity to follow his racing dreams; along with his girlfriend Rachel for her support. For the 2018 season, Kennedy’s #9 Bone Stock program at Peterborough Speedway will receive promotional assistance from Apex Auto – Oshawa, Sign Works – Port Perry and Clarke Motorsports Communications. Family, fans and friends can follow the team at the track and by liking the ‘skracing’ page at www.facebook.com.