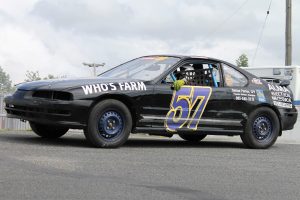 Its all come down to this. The 2018 regular season is about to wrap-up, with track titles decided during the Championship Clash – Saturday, September 1st – at Peterborough Speedway.

“Teams in each division have enjoyed a strong campaign and fans have been treated to some outstanding battles on a weekly basis,” Josiasse said. “It seems like the schedule rolls-by faster and faster every year. Once the checkered flag waves, we’ll start planning for the 26th edition of the Autumn Colours Classic.”

Josiasse says it doesn’t look like any of the point chases will be decided until the final laps of the night. The big story of the year is Ryan Oosterholt, who is in the running for championship season in the Bone Stock, Mini Stock and Renegade Truck divisions. He unofficially holds an advantage of more than 20 points in at least 2 of the 3 classes. Bailey Jacobs has a 14 point lead over Mark Gordon in the Super Stock title chase, while Dan McHattie has a 50 point Late Model cushion on James Horner and Amanda Balson going into the last point night of the year.

For Peterborough Speedway’s 2018 season finale – Saturday, September 1st – pit gates open at 12:30, with the spectator grandstands unlocked at 3:00 and racing at 5:00. Visit the track web-site as well as Facebook and Twitter social media platforms for complete information.

Be sure to make your plans now for the 26th annual Autumn Colours Classic – Friday, October 5th to Sunday, October 7th – at Canada’s Toughest 3rd of a Mile Paved Oval. This year’s edition feature competition with close to 10 classes, plus the inaugural running of the Late Model/Pro Late Model Electric City 167. See www.peterboroughspeedway.com and select ‘Autumn Colours’ for all the latest news.