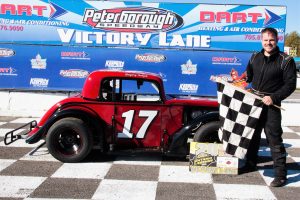 It was a track he’d never seen before and the biggest race of the year. Facts that may have intimidated other drivers, but they faze Gregory Rudzik in the slightest.

The invader from Michigan – who won an east-west combination event in September at Grand Bend Speedway – started on the front row next to Wesley Cuthbertson, along with 19 others in the field who were seeking the $1,000 winner’s share of the $10,000 Trailers Plus Eastern Ontario Legends Series total purse payout – Sunday, October 8th – at Peterborough Speedway’s Autumn Colours Classic.

From the drop of the green flag, Rudzik took control of the ‘A’ main event. A few yellow flags may have delayed his charge, but couldn’t prevent the inevitable. The driver of the #17 machine started to work through cars at the back of the field near the halfway mark and then held-off a late challenge from Cole McFadden to earn a trip to victory lane. Dave Riopelle, Miles Tyson and Parker Traves followed the lead duo across the line. Jamie Riberdy, Paul Pierik, Terry McClelland, Adam Cuthbertson, Chuck Hopkins, Jamie MacArthur, Jeff Drimmie, Jeff Forsey, Rick Eades, Cory Richardson, Joe Sherman, Dawson Drimmie, Wes Cuthbertson, Bryan Batty, Don Arnott and Shawn Murray completed the running order.

Trailers Plus Eastern Ontario Legends Series notebook: Cole Ledson contacted the retaining wall on the outside of the first turn during qualifying and the #14c was sidelined for the day. He was offered a ride in Andrew McFadden’s #02 machine, but didn’t start the main event…Former Peterborough Speedway 4Fun driver Andrew Massey struggled with engine issues all weekend and didn’t make the feature event starting line-up…Even though he wasn’t there to defend his 2016 Autumn Colours Classic win, Matt Haufe clinched this year’s Eastern Ontario Legends Series title. The 25 year-old from Stittsville was on his way to the Las Vegas Motor Speedway bullring for the U.S. Legends Asphalt Nationals – Friday and Saturday – October 13th and 14th.

The Trailers Plus Eastern Ontario Legends Series awards banquet will be held Friday, November 10th at the Canadian Canoe Museum in Peterborough, Ontario. Full details can be found on the series web-site and Facebook page.