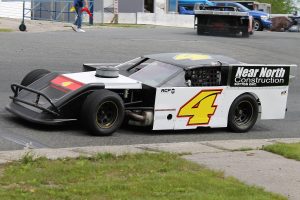 The Ontario Modifieds Racing Series – powered by Torque Builders Inc. – brings a great night of action to each event, at every track. After claiming the overall championship in 2015 and the runner-up spot in 2016, Robert James Racing from Bradford, Ontario is one of the top teams on the tour. Although their #68 car missed the year’s first 2 events, Stu Robinson Jr. will be back in the fold when the popular open wheeled squad returns to Peterborough Speedway on Saturday, June 10th. Team principle Robert James says it’ll be great to have his ‘family’ back together at the track.

“We had the chance for Stu to run the Short Track U.S. Nationals at Bristol Motor Speedway and we couldn’t pass it up,” Robert James said. “The weekend didn’t go exactly as we’d planned, but we made the main event through the last-chance qualifier. Things have a tendency to happen pretty fast at that track and we were caught-up in an incident that hurt the car. Its taken some time and a lot of hard work by the crew, but we’re ready and will have both cars at Peterborough.”

In Robinson’s absence, Connor James has been flying the team’s colours and turned-in a solid top 5 effort at this year’s opening date – Saturday, May 20th – at Sunset Speedway. The talented youngster – who celebrated his 20th birthday in March – was 7th when the series debut – Saturday, May 27th – at Canada’s Toughest 3rd of a Mile Paved Oval. Robert James says Stu Robinson’s experience is the perfect match for his son’s youthful exuberance.

“Like any team owner, I’m looking for our best performance at every event, but consistency is the key. We’ve proven that you don’t always need to win every race to clinch a championship,” James explained. “Two years ago, Donny Beatty took the title in our car without winning a main event. Stu finished second last year by being near the front of the field every time the checkered flag waved, but he didn’t win a race either. I’m like to celebrate with one of our drivers in victory lane, but we’ve enjoyed some great moments over the years.”

James points to homework as one of the main reasons behind his team’s success. The team logs some long hours behind the scenes and that effort continues once they get to the track, with changes being made during practice sessions before the initial green flag and as the night’s race action rolls along. The car owner believes that being successful on the track means that you never stop working.

“Everyone associated with our teams – whether it be the 2 OMRS cars or the Lucas Oil Sportsman Cup Series program – is committed to the same goal.”

Robert James Racing is supported by Near North Construction and WIX Filters. Clarke Motorsports Communications is pleased to represent the #4 and #68 Ontario Modifieds Racing Series teams during the 2017 season.