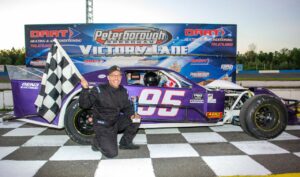 A familiar face was celebrating in victory lane – Saturday, June 25th – as the Ontario Modifieds Racing Series, presented by GEN-3 Electrical returned to Canada’s Toughest 3rd Mile Oval. Former series champion Rob Warnes – who won the title in 2014 – started on the inside of the front row and led every lap of the caution-free main event for his first win of the season.

The driver of the No. 95 machine faced an early challenge from tour newcomer Shane Pollock but he never looked back on the way to his first Peterborough Speedway victory since 2016. Ben Gruntz and Tyler Bouillon got around Pollock for 2nd and 3rd respectively. Chad Strawn, Alex Cuzzilla, Bob Franks and Randy Hollingsworth completed the running order. Rob Richards, Rick Warnes and John Baker Jr. did not start the main event.

Ontario Modifieds Racing Series notebook: Peterborough Speedway’s evening of racing was billed as Autism Awareness Night and second place finisher Ben Gruntz carried a special number design on his No. 4 car, as well as a decal to honour the memory of Draven Graham, an 11-year-old non-verbal youngster with Autism from Lindsay, Ontario who passed away earlier this year. OMRS officials also collected donations for the family’s ‘Go Fund Me’ page at the tour’s sign-in table at the track…A trio of series regulars were able to take the green flag for the 20 lap feature tilt. John Baker Jr. was sidelined after making hard contact with the turn 4 retaining wall in the night’s 1st qualifier. Rob Richards suffered mechanical issues in the 3rd heat race, while Rick Warnes couldn’t return after his No. 90 ride developed problems in the 2nd preliminary round.