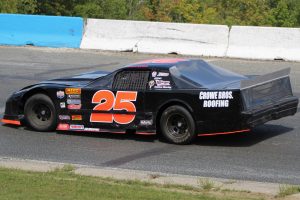 Power and strength. 2 of the characteristics used to describe the comic book legend ‘Man of Steel’. Even though the name Superman doesn’t appear anywhere in the driver roster, Peterborough Speedway’s KOD Disposal Super Stock division provided fans with some powerfully strong competition during the track’s 2019 season.

Close to 20 of the province’s best Super Stock race teams rolled through the pit gates at the tight, tricky bullring on Mount Pleasant Road and when the year’s final point standings were tallied, there was only a margin of around 90 markers between the top 5 drivers in the running order. Track owner and promoter J.P. Josiasse says that’s the level of competition fans at Peterborough Speedway have come to expect.

“For more than half a century, we’ve had a commitment to provide the best of the best and this year is no exception,” said Josiasse. “Our teams have been working hard to make sure that everything is ready for when we drop the green flag.”

On the way to his track championship, Mark Gordon – who has experience in several different provincial classes including Limited Late Models, Open Wheeled Modifieds and Super Late Models, while also prepping and maintaining a Super Stock ride for his son Kyle – logged a mid-season hot streak of 4 main event checkered flags. Gordon finished the year just over 20 points ahead of his friend Howie Crowe. Tim Burke, Marlie Owen and Paul Boundy were 3rd, 4th and 5th in the final standings.

Pending provincial government approval as it pertains to the size of allowable gatherings, Peterborough Speedway’s schedule is slated to open Saturday, May 16th. The 2020 Pure Country 105 Season Opener – with free spectator grandstand admission – will welcome fans, drivers and race teams to a new year of hometown racing. Pits are planned to open at 12:30, with the general admission grandstands unlocked at 3:00. The Great Canadian RV green flag flies at 5:00.

For complete schedule details and the latest off-season news, visit www.peterboroughspeedway.com or see the track’s Facebook and Twitter social media platforms. There is also a free track app available for Smartphone users.