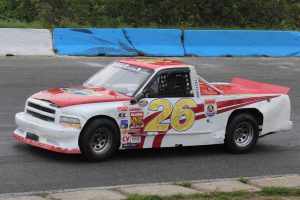 When someone throws a great party, everyone wants to be there. That was the case with the Trent Lakes Complete Plumbing Renegade Truck field at Peterborough Speedway. Numbers in the popular pick-up pack reached new heights during the 2019 campaign. Track owner and promoter J.P. Josiasse says it was great to have some new faces come to the dance.

“Our commitment to the class really paid off last year,” said Josiasse. “The numbers grew from one season to the next and produced some exciting action. Even with the turn out we saw last year; we’re hearing about some fresh talent coming to the division when we raise the curtain Victoria Day Weekend for the new schedule.”

Around a dozen teams signed-in for the weekly wars at the tight, tricky bullring on Mount Pleasant Road and at the recent track awards banquet, Black Flag Racing was recognized as the Renegade Truck division champions for the second straight year, as drivers Nicholas Ledson and Brad Lavalle shared the duties throughout the season. It was the 3rd consecutive title for the dominant Dodge that also claimed 2017’s 50th anniversary crown with the #99 on the door and current Super Stock runner Tim Burke at the controls.

After the arrival of her daughter kept her on the sidelines for a season, Stacy Switzer was back in 2019. The Bancroft, Ontario speedster scored another main event checkered flag and finished in 2nd place – about 30 points behind the leader – in the championship standings. She also got to race with her father Stephen Bierworth, who ran a limited schedule and was 10th overall in the final rundown.

With his family-owned roofing company providing sponsorship support on the side panels of the 4th and 5th place machines – run by the husband and wife duo of Jeff Dolley and Terri-Anne Whittern – Paul Boundy suited-up for battle and added a truck division ride – where he finished 7th in the standings – to his duties in the Super Stock ranks.