With a goal of gaining ground or solidifying their hold on the 2016 track titles, drivers in the Jiffy Lube Mini Stock, Trent Lakes Complete Plumbing Renegade Truck, Paul Davis Systems Thunder and Earl Ireland Auto Sales Late Model divisions at Canada’s Toughest 3rd of a Mile Pavel Oval; along with the Ontario Modifieds Racing Series hit the ground running – Saturday, August 27th – on the second to last night of the regular season at Peterborough Speedway. 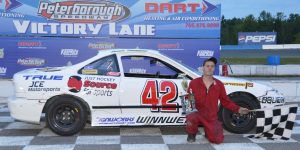 The first feature event of the night was a 20 lapper for the Jiffy Lube Mini Stocks, as Kevin Strutt and Donovan Price brought the field to the Great Canadian RV green flag. Strutt would take the early lead, but a yellow flag for an incident on the front stretch would slow the pace, with just 6 laps complete. James Townsend’s #42 machine has been the class of the Mini Stock field and this night was no exception, as the point leader added another win to his season total. Strutt would hang on for second, with defending track champion Tyler Junkin, newcomer Mike Johnson Jr. and Neil Hannah following the lead duo to the stripe.

Duane Cinnamon and Chris Burrows would lead the Ontario Modifieds Racing Series pack to the line for their 25 lap headline dance, but a caution for an issue between turns 3 and 4 caused drivers to regroup before a lap had been scored. On the restart, Cinnamon would take the lead and pull out to a huge advantage. The #41 machine began lapping backmarkers with 14 laps on the board, but the race’s second caution flag for a 2 car crash in the 3rd turn brought the field to his back bumper for a lap 17 restart.

It was a brand new race, as Rob Warnes battled for the lead as the green flag waved and John Baker Jr. entered the fight, taking the top spot with 22 laps complete. The series point leader with take another win, with his closest challenger Stu Robinson Jr. second. Cinnamon, Rob Warnes and Burrows rounded-out the top 5.

on the front row. A second lap yellow flag for fluid on the track brought an end to the night for Chris Burrage. The Dallin brothers maintained their strong pace throughout the race distance, with father and daughter duo of Stephen and Stacy Bierworth following them across the line.

James Townsend and Bailey Jacobs led the way as the Paul Davis Systems Thunder Cars rolled from the staging area for their main event. There wasn’t even a lap complete before the yellow flag waved. As the field regrouped, Jacobs grabbed the lead from the outside line and had started to catch the rear of the field at the halfway point. Current point leader Howie Crowe – who had worked his way into second – snatched the lead from Jacobs with 15 laps on the scoreboard and held on for the win. Townsend, Jessica Pasinetti and Nick Oram completed the top 5. 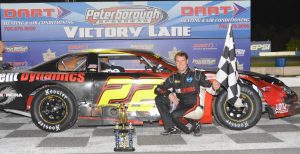 Rookie James Horner and former Autumn Colours Classic winner Chris Mitchell led the Earl Ireland Auto Sales Late Models to the green flag for the 30 lap feature that would wrap-up the night’s action. Mitchell would take the lead with 3 laps down and current point leader Rick Spencer-Walt took second, 4 laps later. The leaders caught the back of the pack with 17 laps on the board and had nearly half a track’s advantage over 3rd running Ryan Kimball. Mitchell would take the win over Spencer-Walt, Kimball, Amanda Balson and Tyler Betts.

Bullring Bullet Points: The night’s 50/50 – in support of the Millbrook Lions Club – paid $717.00 to Pat Keetch of Oshawa, Ontario…Former Late Model and Autumn Colours Classic champion Ryan Kimball was back in action for the 2nd time this season…The game of racing musical chairs continued for Kris Khan. After taking turns in the #16 Thunder Car and #12 4Fun rides in recent weeks, he steered the #48 Mini Stock into battle…OMRS driver John Baker Jr. made a friend with a new fan before racing got underway. Seeing the youngster wandering the pits with his parents, he helped him into the driver’s seat of his #63 open-wheeled machine…For the second week in a row, track officials were forced into hurry-up mode to avoid an approaching weather system. King of the Hill, the planned intermission and OMRS Frisbee toss were all victims of the weather radar.

The final event of the regular season at Canada’s Toughest 3rd of a Mile Paved Oval is the Championship Clash on Saturday, September 3rd. Drivers in the home track Battlefield Equipment Rental 4Fun, Jiffy Lube Mini Stock, Trent Lakes Complete Plumbing Renegade Truck, Paul Davis Systems Thunder Car and Earl Ireland Auto Sales Late Model fields will battle it out for all the marbles. Also on the show will be a 50 lap ‘A’ main for the OSCAAR Outlaw Super Late Models. Pit gates will open at 1:00, with the spectator grandstands unlocked at 3:00 and the night’s first green flag at 5:00.