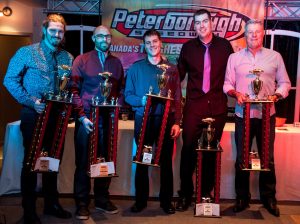 As it has in seasons past, The Ranch Resort in Bethany, Ontario was the setting – Saturday, November 26th – for Peterborough Speedway’s annual banquet and award presentation.

Point fund awards were presented, with Jeremy Kelly acknowledged as the 2016 champion in the Battlefield Equipment Rental 4Fun division. Kelly was named the field’s most sportsmanlike driver, with Ryan Oosterholt’s #79 taking best appearing car, Shawn Solomon rookie of the year and Tara Lintner the most improved driver.

In the Jiffy Lube Mini Stock field, James Townsend took the honours for his first-place finish. The most sportsmanlike driver award went to Gil Brooks and the #34 machine of Kevin Strutt voted best appearing car. Tiffany Vandebelt and Erin Kearns were named rookie of the year and most improved driver respectively.

After a pair of second place finishes, Howie Crowe’s performance during the year paid-off with the Paul Davis Systems Thunder Car title and the most sportsmanlike driver honour. The year’s best appearing car was the #15 of Rob Richards, with Nick Oram taking rookie of the year and Kyle Gordon named most improved driver.

A solid season behind the wheel of his #31W machine saw Rick Spencer take the crown in the Earl Ireland Auto Sales Late Model field. In memory of Terry Calvert, Tyler Betts – who waged one of year’s most intense feature race battles with Spencer-Walt – was named most sportsmanlike driver. Spencer-Walt had his equipment named best appearing car, while James Horner took the rookie of the year prize and Drew Stieler was voted as the most improved driver.

Bullring bullet points: Peterborough Speedway will hold a driver’s meeting Sunday, December 4th in the Rogers Room at the Best Western Otonabee Inn, 84 Landsdowne Street East, in Peterborough. Registration will start at 12:30, with the meeting getting underway at 1:00.