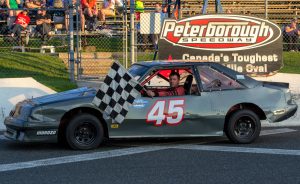 After being interrupted by Mother Nature a week earlier, fans and officials at Canada’s Toughest 3rd of a Mile Paved Oval celebrated the arrival of a new season – Saturday, June 22nd – with a hot night of action at Peterborough Speedway.

Things got rolling with the holdover Jiffy Lube Mini Stock feature from Saturday, June 1st that saw Jassen Whyte and Kent Missons on the front row. Whyte took the lead early, with James Townsend looking for the spot. The former track champion claimed the lead following a lap 4 caution flag, with Missons grabbing the runner-up spot at the halfway mark and Nolan Gould taking 3rd a couple of laps later, as the pack caught the tail-end of the field. The race’s final yellow – on lap 13 – brought everyone back together, but Townsend wouldn’t be denied the win. Neil Hannah, Jeremy Kelly, Ember Junkin and Kevin Strutt rounded-out the top 5.

First up for the regular night’s features was a 25 lap headline dance for the Ontario Modifieds Racing Series, with Craig Scott and Randy 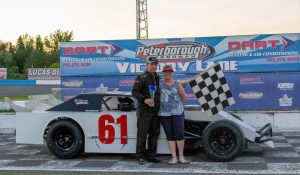 Hollingsworth on the front row. Scott jumped out to an early lead, with Bob Franks on his back bumper. The driver of the #72 machine took over the top spot, with a handful of laps on the board. Dwight Brown was looking to the outside line for a way around Franks, when the yellow waved for a 2nd turn issue with a dozen laps down. Brown was still trying to wrestle the lead away from Franks on the restart, when Chad Strawn introduced his dog to the fight. Another caution – this time in turn 3 – created a 5 lap trophy dash, with Brown finally taking the lead. The former series champion held-off Strawn for the victory, with John Baker Jr., Franks and Alex Lees next across the stripe. 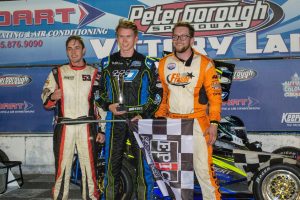 The Can Am TQ Midget Series was on hand for its only appearance of the 2019 season and ran a pair of 25 lap feature events. In the opening round, Ryan Fraser took the win over Dominique Smith, Steven Murdock, Darren Dryden and Brandon Zavarella. Series point leader and reigning tour champion Dryden claimed the second round, with Fraser, Brandon Hauck, Smith and Murdock completing the top 5. Full series information can be found at www.canammidgets.com. 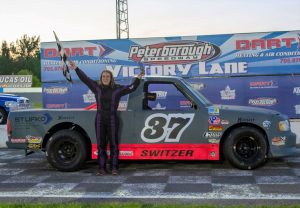 Lakes Complete Plumbing Renegade Truck division. Hard work during the off-season has seen the numbers almost double since last year and according to track officials, there are still more trucks to come. Jeff Dolley and Bill O’Hara brought the field from the staging area for a 20 lap main event. An early-race yellow flag re-racked the pack, with Stacy Switzer taking the lead on the restart. The Bancroft, Ontario racer watched from the sidelines in 2018 after the birth of her daughter, but returned to the winner’s circle over Bill O’Hara, Brad Lavalle, Alex McGibbon and Terri-Anne Whittern. 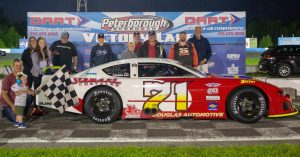 Steve Powell and Jack Morgan brought the Late Model teams to the Great Canadian RV green flag for 25 laps of action. Morgan – who has been turning heads in his very brief career – took an early lead, but Dan McHattie was coming-on fast and claimed the spot with just a handful of laps on the scoreboard. After a yellow flag for a 3rd turn issue, McHattie built a commanding lead and was logging some strong laps. Amanda Balson grabbed the runner-up spot but couldn’t catch the dominant #71 car. Brandon Feeney, Kyle Batty and Mark Gordon completed the top 5.

Action wrapped-up with the return of the Mini Stocks, as Melissa Bullen and Kent Missons brought the pack from the staging area. A multi-car wreck 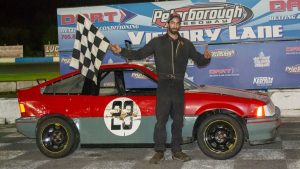 coming off the 4th turn brought out the red flag and eliminated several cars from the show. Luckily, there were no serious injuries. Neil Hannah took the lead on the restart, with Jeremy Kelly looking to take away the spot. Try as he might, this wouldn’t be the night for Kelly’s first win in the new division. Kevin Strutt, James Townsend and Victor Vowles followed the lead duo across the line.

All finishing positions are unofficial and subject to scoring review and post-race safety and technical inspection.

Bullring bullet points: Steve Brash of Sutton West, Ontario went home with the Millbrook Lions Club 50/50 payoff of $527.50…Former Kawartha Speedway Mini Stock track champion Chance Isherwood made his first start of the year in his #35 machine…After experiencing rear-end issues during the rain-delayed feature, Nolan Gould’s #28 ride was sidelined. Luckily, he was able to borrow a car from Ryan Oosterholt and with the help of some racer’s tape took the renumbered ride to a heat race win…Andrew Quibell made his 2019 debut in the Renegade Truck field.

Head to www.peterboroughspeedway.com for round-the-clock news and information or see the track’s Facebook and Twitter social media profiles. Look for Peterborough Speedway wherever you pick-up your smartphone apps and keep the track in the palm of your hand all season.