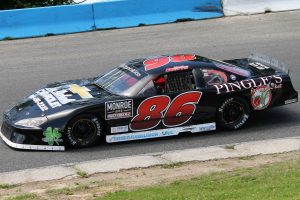 The first half century of action at Canada’s Toughest 3rd of a Mile Paved Oval entered the history books with the final checkered flag of last year’s Autumn Colours Classic. At the same moment, staff and officials at Peterborough Speedway began making plans for the 2018 schedule. Track owner and promoter J.P. Josiasse says that the off-season is almost busier than when the next Saturday night racing program gets underway.

“At this time of year, we’re always looking forward and thinking about the new season,” said Josiasse. “There are sponsorship packages to put together and updates to the rule book that need to be finalized. Working toward opening the gates on the Victoria Day weekend takes a lot of effort behind the scenes and we’re in the office to get things ready.”

Starting in 2018, the division that had been known as 4Fun will undergo a name change to ‘Bone Stock’, while the former Thunder Car class will now go by the Super Stock title. Josiasse and the Peterborough Speedway team will also be part of a multi-track group that will promote events in the rebranded Ontario Super Late Model Series. 75 lap shows will include time trials to determine qualifying spots and the winner’s payout proposed for $2500, with a strong payout through the running order. The tour’s first of 8 dates is scheduled for Saturday, May 26th at Flamboro, with stops at Sunset, Sauble, Jukasa Motor Speedway and the tight, tricky bullring on Mount Pleasant Road, west of the Liftlock City leading up to the series’ finale – October 6th and 7th – at the Autumn Colours Classic.

“Our commitment to quality, family motorsports entertainment remains the same as we head into the track’s 51st season of continuous operation,” Josiasse said. “It’s a very competitive marketplace and we need to give the fans the best value for their dollar, week-after-week.”

Fans can also keep up-to-date with the latest off-season news and information by visiting www.peterboroughspeedway.com, liking the track’s Facebook page and following it on Twitter.