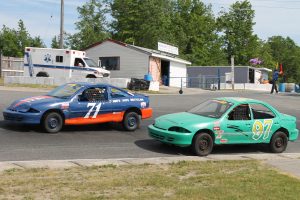 Its time for the talking to stop, because the green flag is about to drop.

Long hours of hard work by the promotional team during the off-season has allowed track officials to put together an action-packed schedule of 16 regular season events and the ever-popular Autumn Colours Classic. Canada’s Toughest 3rd of a Mile Paved Oval will be a favourite destination throughout the spring, summer and fall of 2017 and track owner/promoter J.P. Josiasse says it promises to be an exciting schedule from the moment the gates swing open.

“There’ll be familiar faces in different places. New looks for fan favourites and even some drivers who’ll be taking their first ever laps on the track,” Josiasse said. “Everyone wants to earn a track championship, no matter what division they race in. Taking the title during the 50th Anniversary Season will be an honour that’ll happen just once in a lifetime. It will be a valuable piece of history and an unforgettable moment in time.”

The 50th Anniversary Celebration – Saturday, May 20th – at the tight, tricky bullring on Mount Pleasant Road, west of the Liftlock City rolls to the line with pit gates opening at 1:00 and spectator grandstands unlocked at 3:00. Racing starts at 5:00.

Bullring bullet points: Full schedule details and the latest news can always be found by logging onto www.peterboroughspeedway.com, liking the Peterborough Speedway page on Facebook or following the track on Twitter. You can also download the free app on your Smartphone.