While most people associate pick-up trucks with carrying cargo, the Trent Lakes Complete Plumbing Renegade Truck field karted away some impressive performances during the 2021 season at Peterborough Speedway.

With just a handful of dates on the recently completed schedule, the Black Flag Racing No. 26 – with Brad Lavalle and Ryan Oosterholt sharing the driving duties – claimed the overall title by a 10-point margin ahead of the daughter and father duo of Stacy Switzer and Stephen Bierworth. Second generation upstart Kyle Gordon – who scored his first career feature win on the final night of the regular season – was next, with Paul Boundy and Shawn Murray tied for 5th. A check of the final standings shows the top runners in the class were separated by only 30 points.

“The pick-up pack always puts together some solid runs,” said Peterborough Speedway track owner/promoter J.P. Josiasse. “We’re hearing rumbles that there could be some new team owner/driver combinations coming on board for next year and that could possibly lead to this season’s late push to add the class to the Autumn Colours Classic for an invitational exhibition event becoming a reality.” 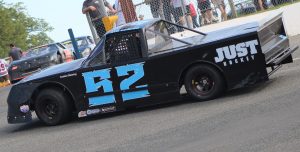 Due to current regulations affecting capacity regulations and track food sales, Josiasse says the promotional team has been working hard to put together the 2022 line-up for the venue known as Canada’s Toughest 3rd Mile Oval. While they’re prepared to work with whatever limitations are required, officials are expecting the proposed schedule – which will be released early in the new year – to return to its traditional Victoria Day weekend opening. Things are just in the planning stages for now, but track staff is hopeful that everything will return to the template used in past seasons.

Your off-season home for the comings and goings at Central Ontario’s place to race is www.peterboroughspeedway.com. Fans can also tune into the track’s Facebook, Twitter and Instagram social media platforms for the latest news and schedule information on the upcoming season at Peterborough Speedway.

Everyone at Peterborough Speedway extends best wishes for a happy and safe holiday season.