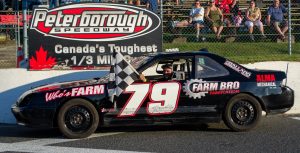 Erin Kearns and Ryan Oosterholt brought the Jiffy Lube Mini Stock field to the Great Canadian RV green flag for the night’s first feature. Oosterholt took the lead from his outside front row starting spot and never looked back. The multi-time track champion was working through slower cars with only a handful of laps on the scoreboard and had built-up nearly a half lap’s advantage when the crossed flags – marking the halfway mark – were displayed. In a race that ran caution-free, added another checkered flag to his resume. Jeremy Kelly, Ember Junkin, Brad Lavalle and Kevin Strutt rounded-out the top 5.

15 of the 17 Trailers Plus Ontario Legends Series teams on hand came to the line for their 25-lap feature, with Kevin Foisy and Paul Pierik on the front 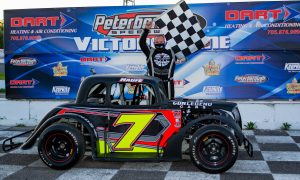 row. After watching the Mini Stocks run without a yellow flag, the OLS crew was looking to turn-in the same performance. Even with Matt Haufe and Nicholas Ledson fighting it out for the win, the plan was working to perfection under a single car spin near halfway slowed the pace. Ledson took the lead with 18 circuits complete but Haufe wrestled it away again with only 3 laps remaining and held-on for the win. Ledson was 2nd, with Parker Traves, Foisy and Pierik chasing the leader across the line.

With Marlie Owen and James Townsend showing the way, it was time for a 25-lap KOD Disposal Super Stock feature. Owen was shuffled to the outside line early with a number of teams working around her on the inside. Anthony DiBello moved into the

lead as the scoreboard clicked-off 3 laps complete, with Tyler Bouillon hot on his tail. Brad Stevenson and Rob Richards were next in line, but former track champion Mark Gordon had one of the fastest cars on the track. His fine run came to an end as the No. 52 ride pulled to the infield pit lane on lap 10. From there, it was DiBello and Bouillon slicing through traffic. DiBello took the win, with Bouillon, Richards, Townsend and Stevenson completing the top 5. Marlie Owen rebounded for 6th at the checkered flag.

The Bone Stock field at Peterborough Speedway is one of the best in the province. Backed by Battlefield Equipment Rental, it thrills fans weekly with an enviable combination of quality and quantity. Ryan Oosterholt and Shawn Solomon paced the pack from the staging area for the 2021 season opener. Just as he’d done earlier in the night, Oosterholt took the lead on the first lap and never looked back in the caution-free feature. There were some heavy-hitters – including Jake Kelly, Solomon, Sean Kennedy and Angelo Novis – who made things entertaining while fighting their own battle, but no one could do anything with the potent No. 79.

All race results are unofficial and subject to scoring review as well as post-race safety and technical inspection.

A strong crowd for the first show of 2021 provided a 50/50 first prize payday of $651.00 for Gerald Tutty of Port Hope, Ontario…Brock Baker made his debut as a Peterborough Speedway Mini Stock regular, wheeling the No. 63B…Jeremy Dobb was on hand to make his first start at Canada’s Toughest 3rd Mile in the No. 57 Super Stock. James Townsend steered the former Howie Crowe No. 28…Veteran runner Malcolm ‘Pops’ MacDonald regularly makes the weekly tow from the Ottawa area to race in the Bone Stock class. His opening night voyage was all for not, as his No. 82 machine blew a head gasket in practice.

Action returns to the popular Central Ontario oval Saturday, July 17th with the home track Bone Stock, Mini Stock and Late Model divisions along with the Ontario Modifieds Racing Series. The first heat race hits the track at 6:00. Advance tickets are available now and can be purchased by using the

www.eventsprout.com/events/peterborough-speedway-2000-ltd reservation platform. There is also a link to the ticket ordering site through the track website.

Stay on top of the latest schedule updates and track information by visiting www.peterboroughspeedway.com or checking the details through the Facebook and Twitter social media platforms. A free app is also available for Smartphone users.