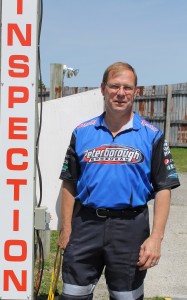 It isn’t Daytona or Indianapolis, but weekly short track racers are as committed to finding their way to victory lane as the drivers who compete on the national stage. While the trophies and cheques aren’t quite as big, observance of the rule book and the overall safety of the equipment is just as important.

Drivers in every division at Peterborough Speedway are required to take their cars through the Reinhart Trailer’s Tech Lane to be inspected before going onto the track each week. The top 3 finishers in any main event are also examined following the race. After having a variety of individuals perform the task over the past couple of seasons, the venue known as Canada’s Toughest 3rd of a Mile Paved Oval is proud to welcome David Brown as its head technical inspector.

The 52 year-old from the Ottawa area is a familiar face to Central Ontario area racers. He performed the same duties at Kawartha Speedway and his hometown Capital City Speedway. There was also a tenure with the Quebec arm of the American-Canadian Tour and the former CASCAR Super Series. Brown says that ensuring the cars are safe is just as important as making sure the teams are following the rulebook for their particular class.

“I’ve been around the sport almost my entire life and there isn’t much that I haven’t seen over the years,” said Brown. “Racecar drivers and team owners are very creative and have many diverse ways of interpreting the rulebook. We’ll be doing random checks in a number of different areas for the balance of the season to be certain that teams aren’t trying to push the envelope.”

While he declined to identify specific areas of the cars that would be checked, Brown – who worked as a mechanic with OC Transpo in the Nation’s Capital – wants the teams to understand that the most important aspect of his job is providing a safe racing environment for drivers in every division at the track.

After the Chase for the Colours Pole Qualifier – Sunday, June 28th – was postponed due to rain, a new month of action at the tight, tricky bullring on Mount Pleasant Road, west of the Liftlock City gets underway Saturday, July 4th. Mini Stock, Renegade Truck and the Earl Ireland Auto Sales Late Model divisions will be joined by the Ontario Modifieds Racing Series and Ontario Legends for Peterborough Speedway’s annual Autism Awareness Night. Pit gates will open at 3:00, with spectator grandstands unlocked at 5:00 and the first green flag at 6:00.

Fans can always find the latest news at www.peterboroughspeedway.com or by liking the track’s page at www.facebook.com or following it on Twitter. You can also download the free Peterborough Speedway app on your Smartphone.