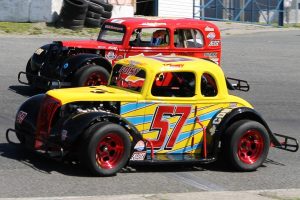 Action, excitement and great racing throughout the pack have been trademarks of the Trailers Plus.net Eastern Ontario Legends Series inaugural season. After a weekend away, the popular tour returns to its unofficial home track Saturday, July 29th with another stop at Peterborough Speedway. Spokesperson Jeff Drimmie, who is part of the EOLS team of officials – that also includes Andrew McFadden, Geordie Ledson and Kevin Foisy – says drivers and teams are looking forward to heading back to Canada’s Toughest 3rd of a Mile Paved Oval. The show will also feature the home track 4Fun, Mini Stock, Thunder Car and Late Model divisions.

“We’ve just come off another busy weekend, with back-to-back races,” Drimmie said. “Our car counts are very strong across the board – averaging about 25 at each stop – with some impressive action from green flag to checkered. The fans are hearing about what we’re doing and they’re coming-out to see what all the excitement is about.”

Friday, July 21st the Eastern Ontario Legends Series signed-in at Kawartha Downs & Speedway for the second of this year’s pair of events. As he had already done on 7 previous occasions, Matt Haufe took the checkered flag to extend his streak of consecutive wins to 8 straight. Kevin Foisy and Adam Cuthbertson followed the driver of the #88 machine across the line.

Saturday, July 22nd, it was time for the second of 4 starts at Sunset Speedway, with Foisy putting a stop to Matt Haufe’s dominance with the win. Haufe held-on for a runner-up finish, with Miles Tyson taking the 3rd spot on the podium.

For the Saturday, July 29th event at Peterborough Speedway, pit gates will open at 3:00 and the spectator grandstands unlocked at 5:00. Racing gets underway at 6:00. Full schedule details can be found at www.peterboroughspeedway.com.