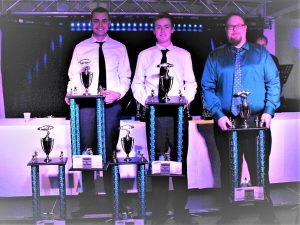 Drivers and teams from the Central Ontario venue commonly known as Canada’s Toughest 3rd of a Mile Paved Oval gathered at The Ranch Resort in Bethany Saturday, December 1st to celebrate a successful 2018 campaign at Peterborough Speedway.

Following a delicious meal, the evening continued as track owner and promoter J.P. Josiasse acknowledged the contribution of the facility’s sponsorship partners and staff, reflected on the strength of the past season, including another successful running of the Autumn Colours Classic and updated those in attendance on the plans for the upcoming 2019 schedule.

Point fund awards were presented, with Ryan Oosterholt once again acknowledged as the champion in the Battlefield Equipment Rental Bone Stock division. Bryan Knox – driver of the #2 – was named the field’s most sportsmanlike driver, with Jack Hannah’s #27 taking best appearing car. Alex McGibbon was the Bone Stock rookie of the year. Kyle Novis, the most improved driver.

In the Jiffy Lube Mini Stock field, Ryan Oosterholt took the honours for his first-place finish. The most sportsmanlike driver award went to Kevin Strutt, while Nolan Gould had his #28 machine voted best appearing car and was also named rookie of the year. Josh Bullen – who picked-up a main event win during the year – earned the most improved driver award.

Oosterholt also accepted the hardware for his championship season in the Trent Lakes Complete Plumbing Renegade Truck field and was named rookie of the year. Carrson Hennessy was voted the most sportsmanlike driver. The championship winning #26 – owned by Dave Sikma – took the class best appearing truck award. Most improved driver honours went to Terri-Anne Whittern.

After finishing in the runner-up spot in 2016 and 2017, Bailey Jacobs claimed the 2018 Super Stock title. Rob Richards took home the most sportsmanlike driver honour. The year’s best appearing car was the #99 of former Renegade Truck division champion Tim Burke, with Marlie Owen named rookie of the year and most improved driver.

A strong performance throughout the year saw Dan McHattie named the Late Model track champion. In memory of Terry Calvert, McHattie was also voted by others in the field as the most sportsmanlike driver. Brandon Feeney was named rookie of the year. Mike Wallace’s #27 was picked as the best appearing car, while Steve Powell took the most improved driver honours for the 2nd consecutive year.

Bullring bullet points: Peterborough Speedway’s annual drivers meeting is scheduled for Sunday, December 9th at 1:00. The event – for all weekly divisions – will be held at the Best Western Otonabee Inn, 84 Landsdowne Street East. 2019 driver registration will be available at a discounted price.