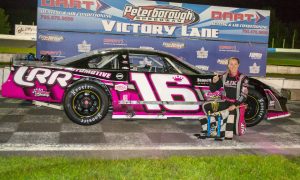 Amanda Balson and Mark Gordon brought the field to the green flag for the Late Model 25 lapper. Gordon had a slight advantage from his outside front row starting spot, but it was quickly erased when the yellow flag waved for an issue in turn 3, with just a pair of laps on the scoreboard. On the restart, defending track champion Dan McHattie was using the high side of the track and gaining ground on the leaders. The top 3 were running nose to tail with 10 complete and encountered the back of the pack just a lap later. McHattie grabbed the lead with 16 laps showing on the scoreboard and survived a pair of late race yellows to claim his second win of the year over Balson, Brandon Feeney, Mark Gordon and Kyle Batty. 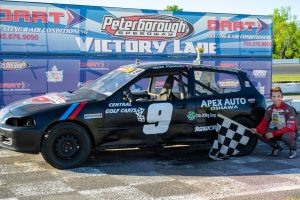 Malcolm MacDonald on the front row. Sean Kennedy was looking to the inside line and took the lead after an early debris caution. Even with the rest of the pack dicing for positions behind him, the hard-charger logged some strong, consistent laps on the way to his first checkered flag of 2019. Rob Crick, Corey Strawn, Knox and Ben Gruntz rounded-out the top 5.

Josh Gruntz and Randy Hollingsworth brought the Ontario Modifieds Racing Series crew to the line for their feature tilt. Hollingsworth’s #62 struggled early and headed to the infield pit area with 6 laps complete. In contrast, Gruntz was a having a strong run and built-up nearly a half track’s advantage, while about 7 others fought for spots behind him. Dwight Brown moved into 2nd, with Chad Strawn running 3rd in a show that had all the makings of a caution free ride. Just as the leaders were catching the tail of the field, the yellow flag flew for an issue in the 4th turn. Gruntz had the entire pack on his back bumper and despite a late race charge from Chad Strawn, he took the checkered flag in the 2019 OMRS opener. Dwight Brown, John Baker Jr. and Nick Lees completed the fast 5.

A solid pack of 28 starters – led by Chris Tubman and Corey Strawn – left the staging area for 20 laps of Bone Stock feature action. A debris caution flew after the opening lap, with Ryan Oosterholt and Strawn fighting for the runner-up spot behind Tubman. A second yellow waved on lap 4 and brought the pack together. Dave Marco was working on getting past Tubman and took over the top spot with the scoreboard showing 10 complete. A third and final caution flag gave everyone a last chance to catch the #19x, but he held-off the challenge. Even though he was the first car across the line, issues with Dave Marco’s car in post race inspection gave the win to Ryan Oosterholt, with Tubman, Strawn, Kris Khan and Bryan Knox completing the top 5. 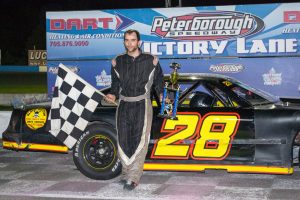 With Steve Powell and 2009 track champion Amanda Balson on the front row, the Late Model division hit Canada’s Toughest 3rd of a Mile Paved Oval for 25 laps of excitement. At the drop of the green flag, it was as if Balson was shot from a gun. Her #16 was strong, but so were the cars of Ryan Kimball and Dan McHattie, who were marching through the field. The trio was working through lapped traffic when the race’s only yellow flew for an issue in the 3rd turn, with only a handful of laps left to go. On the restart, Balson had one challenger on her outside and another on her back bumper, but she was up to the task in the 5 lap trophy dash. McHattie took 2nd, with Kimball 3rd. Kyle Batty was 4th and Brandon Feeney continued his strong early season runs with 5th.

Victor Vowles and Dwight Lavoie led the Jiffy Lube Mini Stockers to the stripe to conclude the night’s action. Jeremy Kelly – who moved-up from the Bone Stock ranks at the start of the year – took the 2nd spot with 2 laps down and was leading the 20 lap affair just 6 circuits later. His #80 machine was strong, maintaining the lead through a lap 12 caution, but not strong enough to keep Almonte, Ontario’s Nolan Gould from stealing the win with a late race pass. Defending track champion Ryan Oosterholt also got around Kelly, who hung-on for 3rd. Vowles and James Townsend completed the top 5.

All finishing positions are unofficial, subject to scoring review and post race inspection.

Bullring bullet points: Former Late Model track champion Tyler Betts took a turn in the #28 Super Stock, in place of Howie Crowe. Wes Cuthbertson – a regular with the Ontario Legends Series – steered the #33 Mini Stock, while former track champion and Autumn Colours winner Ryan Kimball made his first start of the year in the Late Model field. Mike Howe – affectionately known as “Fat Mike” – was back in the #T4 Mini Stock for the first time in 3 years.

Next action at the tight, tricky bullring on Mount Pleasant Road is Saturday June 15th with a 50 lap feature for the Battlefield Equipment Rental Bone Stocks and a 30 lap KOD Disposal Super Stock qualifier for the Canadian Short Track Nationals. The Trent Lakes Complete Plumbing Renegade Trucks, Jiffy Lube Mini Stocks and Trailers Plus Ontario Legends will also be on the show. The Renegade Trucks and Ontario Legends will run double features, to make up for events that were rained-out Saturday, June 1st. Pit gates open at 2:30, with spectator grandstands unlocked at 5:00 and racing at 6:00.

For the latest schedule news and information, be sure to visit www.peterboroughspeedway.com, or the track’s Facebook or Twitter social media platforms. Look for ‘Peterborough Speedway’ where you pick-up your smartphone apps and take Central Ontario’s favourite race place with you wherever you go.