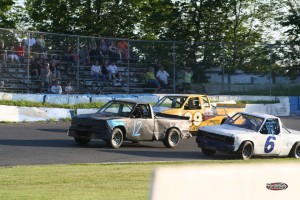 Another hot night at Canada’s Toughest and Fastest 1/3 Mile Oval, with the Biggest show so far.

The Night Started out with the Battlefield Equipment 4 Fun Division. Kevin Strutt (34) took a Checker Flag in the first heat of the night with the #6 of Brad Lavalle taking both the 2nd heat and the Feature Race of the night.

Then the Perry Springs Renegade Trucks took the stage with Rick Edgerton (#29) taking the first heat win but blowing the engine as he came into the winners circle. Leaving the door wide open for Andy McCann (#12) to take the 2nd heat and the Feature Win.

The Hurricane Midgets saw a dominance inthe heat races of the #22 of Amanda McCall, but blowing the engine after her 2nd heat so she couldn’t make the feature race. So the young #99 Adam Tyo took home another win from Peterborough Speedway.

Then the excitement really started to heat up… The Olde Smoke House Enduro Race with the Olde Smoke House cooking up some Roast Beef on a bun for all the drivers tonight, 100 laps of road rage with a purpose! No cautions, just a green and red flag, along with the one flag everyone wants, the checkered flag! After 100 Laps and a few red flags including a couple of spectacular crashes in turn 1 and turn 4, it was Tyler Junkin #401 winning in the 4&6 Cylinder Division, and the Norwood Auto Wreckers Clayton Pederson (#20) winning the 8 Cylinder division.