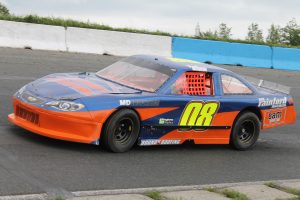 He had always enjoyed a connection to the sport, sharing the support of his family business with several drivers including former Kawartha Speedway Thunder Car champion and 2016 Pro Late Model Autumn Colours winner Willie Reyns. After seeing his company name on the side of other people’s cars over the years, Paul Boundy made the decision to climb behind the wheel himself.

A half season of action in the track’s 4Fun (now Bone Stock) division gave the 39-year-old from Grafton, Ontario a taste for weekly racing and in 2017, he moved-up to the Thunder Car (now Super Stock) field. Midway through his first season in the new class, Boundy rolled an updated piece into the fray at the venue known as Canada’s Toughest 3rd of a Mile Paved Oval and the switch made an immediate difference.

“Running at your hometown speedway – in front of your family and friends – is all about having fun, but you still want to be competitive,” Paul Boundy said. “Changing cars was such positive move. As a team, we finished higher in feature events and as a driver, I was able to gain more confidence in the car’s performance and my ability week-after-week.”

Boundy says some help behind the scenes from Ken Townsend, Brian Ferroni and Dan Archibald led to the transition and helped pave the way to an 8th place finish in the final 2017 point standings. At the season-ending awards banquet, the #08 machine was also named the best appearing machine in the Thunder Car class.

A former 4-wheeler racer in his 20’s, who had absolutely no stock car racing experience when he turned his first laps, Paul Boundy says the support and encouragement he receives from his wife Kaiti and daughter Ava keeps him pushing to finish just one position higher in each feature race. In the shop and at the track, his equipment is prepared and maintained under the guidance of the driver’s father Ray Boundy, along with Austin Sztajocher, Daryl Elizuk and Ryan Bebee. Boundy would also like to thank Willie Reyns for his support.

“This is something you can never do alone and I’m lucky to have a group of people in my corner who are quick to give me a pat on the back or a kick in the seat of my pants whenever its needed.”

To learn about potential sponsorship opportunities with the team, contact boundyroofing@hotmail.com.