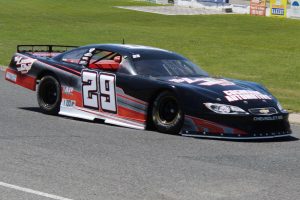 Opening the door to victory lane at the most prestigious short track motorsports event in Central Ontario is an arduous task. That won’t stop teams from close to 10 different divisions from chasing the checkered flag during the 27th annual Autumn Colours Classic, presented by Lucas Oil Products and Pure Country 105 – October 11th to 13th – at Peterborough Speedway.

With a number of different venues represented, the fall spectacular has a reputation for bringing teams with a variety of experience levels into the fold in search of the coveted prize and bragging rights that come with a trip to the winner’s circle and the 2019 edition of the fall spectacular is no exception. From the entry level Bone Stock ranks, all the way to headline Late Model stars, there is plenty of excitement packed into the Thanksgiving Weekend extravaganza at the tight, tricky bullring on Mount Pleasant Road.

26-year-old Jordan Morris – a Bone Stocker at Delaware Speedway – has been racing for 11 seasons but will be making the trip east for his first career ACC start.  Hometown runner Jack Hannah – who won a rain shortened Autumn Colours Mini Stock feature in 2007 – will have his car in the race this year, but despite finishing 9th in the Bone Stock standings, he’ll hand over the driving chores to his son Brandon, who hadn’t run the event since a hard crash in 2016.

Home track regular Tyler Bouillon – who recently celebrated his 19th birthday – will mark the occasion with first Autumn Colours green flag. The Burketon, Ontario native finished 10th in this year’s Super Stock standings. Jordan Latimer made a pair Late Model starts at Peterborough Speedway and this year will mark the 3rd Super Stock start in the season-ending event for the Sunset Speedway regular. Even though his equipment has been parked for most of the 2019 season, Rob Richards has confirmed plans of keeping a string of ACC starts that began in 2014 alive.

For about 20 years, Bobby Cousineau’s motorsports focus was on wrecking cars. A competitor in demolition derbies across Canada and the U.S., he didn’t think about racing them until late in the 2019 season when he made his first start in Peterborough Speedway’s Late Model division. The 35-year-old from Castleton, Ontario who operates an HVAC business is looking forward to his first Autumn Colours Classic. By contrast, Ryan Kimball has been part of this show for the last 18 years. His display case has the hardware from a 2014 ACC win; the same year the 34-year-old from Norwood, Ontario won the hometown Late Model track championship. For the last 5 seasons, Kimball raced in a couple of different classes at the marquee event.

Make sure your season-ending motorsports calendar includes a trip to the 27th annual Autumn Colours Classic, presented by Lucas Oil Products and Pure Country 105 – October 11th to 13th – at Peterborough Speedway. Get full event details at www.peterboroughspeedway.com and the Facebook or Twitter social media platforms.