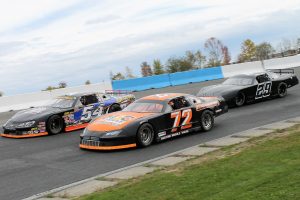 With an early October chill in the air, the Peterborough Speedway pit area was packed with teams putting their equipment through its paces with the goal of securing main event starting positions in the province’s biggest asphalt racing spectacular. The 26th running of the Autumn Colours Classic – presented by Lucas Oil Products – at Canada’s Toughest 3rd of a Mile Paved Oval took the green flag – Friday, October 5th – with the opening round qualifying events.

All finishing orders are deemed unofficial and subject to scoring review as well as post-race technical and safety inspection.

Bullring bullet points: A 50/50 payoff of $435 went home to Roseneath, Ontario with Tamara Williams…With inclement weather a possibility for Saturday, track officials elected to add a second set of qualifying action for the Jiffy Lube Mini Stock and Trailers Plus Ontario Legend divisions.

The 26th edition of the Autumn Colours Classic – presented by Lucas Oil Products – continues Saturday, October 6th. 2nd round qualifying, including time trails for the Hoosier Racing Tire Ontario Outlaw Super Late Models and Pro Late Model/Limited Late Model features. ‘B’ mains will be run for the Mini Stock and Super Stock classes, with qualifying and features for the Outlaw Midgets and OSCAAR Pro Sprints.

Pit gates are scheduled to open at 10:00, with the spectator grandstands unlocked at 1:00 and racing at 3:30. Any weather-related changes to the proposed agenda will be advertised at www.peterboroughspeedway.com and posted on the track’s Facebook and Twitter social media platforms.