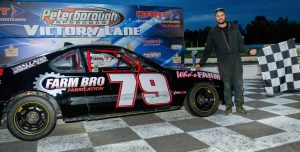 The opening round of action for the 2021 edition of the Canadian Legend Car Asphalt Nationals rolled into Canada’s Toughest 3rd Mile Paved Oval Saturday, August 28th, with the home track Mini Stock and Super Stock divisions – along with the Ontario Outlaw Super Late Models – joining the bill at Peterborough Speedway.

Jiffy Lube Mini Stocks were the first to break through the gate for a 20-lap feature tilt that had Erin Kearns and Ember Junkin on the front row, The lady racers have never been shy about beating their male counterparts and Junkin grabbed the early lead, with this year’s big winner Ryan Oosterholt on her back bumper. An early yellow flag for an issue on the backstretch slowed the pace and that proved to be all the motivation Oosterholt needed. The No. 79 machine took the lead on the restart and wasn’t challenged the rest of the way. While the rest of the pack battled for their own finishing spots behind him, Oosterholt claimed another main event win. Junkin, Ryan Edwards-Kiss, Kevin Strutt and Jeremy Kelly completed the top 6.

Oosterholt had a pair of qualifying heat wins, with Junkin and Edwards-Kiss taking the others.

With 35 laps to settle the score, the Trailers Plus Ontario Legends Series came to the line 21 strong with Matt Haufe and Nicholas Ledson – a pair of 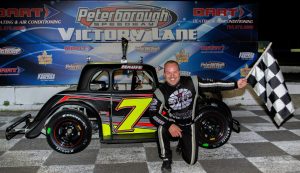 former series champions – on the front row. From the drop of the green flag, Haufe took the lead, with Ledson on his tail. It was a show fans have seen several times this year, as the duo swapped the lead back and forth lap after lap. A lap 6 yellow flag briefly slowed the pace, with Haufe back in control when racing resumed. Ledson moved into the runner-up position on lap 22 and took over the lead again with just 3 laps remaining. Haufe grabbed in back as the field came to the white flag and held-on for another Peterborough Speedway victory. Parker Traves, Ledson, Kevin Foisy and Hudson Nagy rounded-out the fast 5. 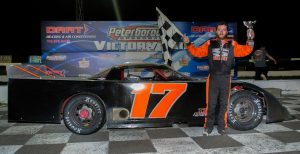 for their 50 lap feature. Passer took an early lead, but Owen and Glenn Watson weren’t about let him out of their sight, John Cadman Jr. and Dario Capirchio joined a 5 car breakaway with less than a handful of laps complete. Watson moved into 2nd and was looking to snatch the lead from Passer as Owen kept watch from 3rd. A yellow flag for an issue in turn 3 brought things back together with just over a dozen laps on the board. Cadman Jr. took advantage of a slip by Watson to take 2nd as pack maintained its torrid pace. The leaders encountered lapped traffic near the halfway mark, with the lead duo about half a track ahead of the 3rd place. In the closing stages, Passer continued his strong run and picked-up the win. John Cadman Jr., John Owen, Ethan Courneyea and Mike Wilkinson completed the top 5. 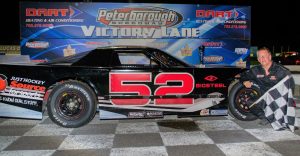 Rob Richards and Tyler Bouillon brought the field of 16 KOD Super Stocks from the staging area for the final main event of the night. Richards grabbed an early lead from the drop of the green flag, with a 4 car fight charging from behind. Mark Gordon moved into the lead with 6 laps on the scoreboard, but things were tightened-up with the yellow flag waved for an incident on the backstretch with 13 circuits complete. Gordon continued in control of the field on the restart and was being challenged by Anthony DiBello as the pack caught the tail-end of the running order. Mark Gordon took the win over DiBello, Bailey Jacobs, Paul Boundy and Brandon McFerran.

All finishing positions are unofficial and subject to scoring review, as well as post-race technical and safety inspection.

Bullring bullet points: The opening night of the Canadian Legend Car Asphalt Nationals wasn’t just a great payday for the race winners. Stu Pilkington of Burketon collected more than $740 in the Millbrook Legion/Lions Club ‘Share the Wealth’ draw…A brief shower delayed the start the night’s action by about 5 minutes. Later in the evening, an oil leak during the Super Late Model feature necessitated a track clean-up interruption, while an on-board fire during the Ontario Legends ‘A’ main sent safety crews onto the track. There were no injuries in either incident… Brandon McFerran joined the Super Stock ranks and recorded a top 5 main event finish. Tim McKnight and Tyler McMurter returned to action in the Mini Stock ranks.

Even though it was late getting started, Peterborough Speedway’s 2021 regular season wraps-up Saturday, September 4th with the Championship Clash. On the docket will be the Battlefield Equipment Rental Bone Stock, Jiffy Lube Mini Stock, Trent Lakes Complete Plumbing Renegade Truck and Late Model divisions, along with the Ontario Modifieds Racing Series. Track officials confirmed that the KOD Disposal Super Stocks have been added to the event. Grandstand gates open at 5:00, with racing at 6:00. To comply with contact tracing regulations, please order advance tickets at www.eventsprout.com/events/peterborough-speedway-2000-ltd. There is also a link available on the track web-site.

Keep an eye on www.peterboroughspeedway.com and the track’s Facebook, Twitter and Instagram social media platforms for the latest news and information, including upcoming details on the 2021 edition of the Autumn Colours Classic.