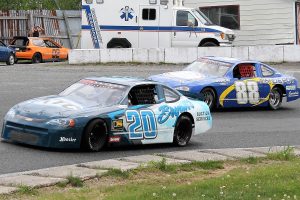 Early in the year, Mother Nature got in the way of the second event on Peterborough Speedway’s schedule. One of the special guest divisions that night was the Ontario Pro Challenge Series. Saturday, August 18th they’ll be on the agenda – along with the Hoosier Racing Tire Ontario Outlaw Super Late Models and the home track Jiffy Lube Mini Stocks and Super Stocks – plus Kid’s Barrel Races during the intermission at Canada’s Toughest 3rd of a Mile Paved Oval.

“Our group was really hoping to get a show in the books, but that’s just the way things go sometimes,” said series spokesperson Garry Shortt. “At least the teams were able to run some practice laps before the rain came. That gave them a chance to put some notes in their set-up files for when we come back Saturday night. That’ll give them something to build on before the green flag flies.”

With a busy night of action on the schedule for Saturday, August 18th, pit gates will open at noon, with spectator grandstands unlocked at 3:00 and the first Great Canadian RV green flag at 5:00.

Peterborough Speedway has offered Central Ontario’s best family motorsports entertainment for over half a century. The annual schedule concludes with the Autumn Colours Classic, Thanksgiving Weekend. This year’s 26th edition features the inaugural Electric City 167, a combine event for Limited and Pro Late Model teams. Full details can be found by selecting the ‘Autumn Colours’ tab from the track web-site.