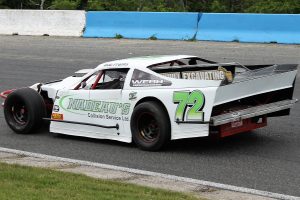 After running half of this year’s first 4 dates on the road, the Ontario Modifieds Racing Series – powered by Torque Builders Inc. – is set to return to the tour’s unofficial home base of Peterborough Speedway for a show Saturday, July 21st at Canada’s Toughest 3rd of a Mile Paved Oval. Bill Pickford – who along with Rick Warnes and Randy Hollingsworth make up the OMRS group of officials – says the tour enjoys racing in different places, but always looks forward to coming home.

“We’ve always had a strong promotional and working relationship with J.P. and the team at Peterborough Speedway,” Pickford said. “They’ve been a warm and welcoming host over the years; giving us a half dozen races each season and a spot to host our ‘Test-a-Mod’ day. A quick glance at our driver roster shows a solid connection to the track and its various divisions.”

Pickford pointed-out that Craig Scott – one of the newest runners with the Ontario Modifieds Racing Series – is a graduate of the area’s Thunder Car/Super Stock ranks and turned laps at both Kawartha and Peterborough Speedways, while Bob Franks had been a local racing fixture for over 20 years before taking a break from the sport.

In the early 80’s, Franks competed in the Challenger division at what was then known as Westgate Speedway, before moving to the Street Stock ranks at Peterborough and Mosport while also running invitational shows at Barrie, Sunset and Flamborough. There were championships at Peterborough and Mosport and more than half a dozen years driving the popular ride car at Kawartha Speedway. Franks says he always wanted to get back behind the wheel and feels good to have had some early season success with OMRS. Above everything else, the pilot of the #72 machine says he’d like to thank all the fans, his family, friends and sponsors for their continued support over the years.