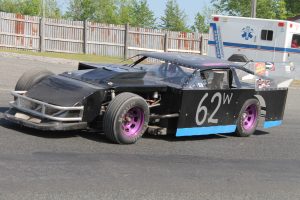 Drivers and teams with the Ontario Modifieds Racing Series – powered by Torque Builders Inc. – have been working hard throughout the off season to get their equipment ready to kick-off an exciting 2017 campaign. There will be new names in the field and familiar faces steering different equipment. Bill Pickford – who along with Richard Warnes and Randy Hollingsworth make-up the OMRS team of officials – says its going to be a great year for the popular open wheel tour.

“Across the board, everyone in the Ontario Modifieds Racing Series family is looking forward to the new season,” Pickford said. “We have a busy schedule – with events at Peterborough, Sunset and Flamboro – again this year and even though the first green flag is about a month away, our drivers are hungry to flex their muscles and get back on the track.”

Defending series champion John Baker Jr. has been burning the midnight oil, reworking his 2016 title winning piece. The popular speedster – best known by the abbreviated handle “JBJ” – says that by the time he’s finished, only the centre section of last year’s car will remain. He’ll be replacing the front and rear clips and suspension. There’ll be a different engine, clutch and transmission. Baker happily reports that the car will still be orange and carry his traditional #63.

At his shop just outside of Stirling, Ontario Randy Hollingsworth and his crew are hard at work getting a pair of cars ready for action. Hollingsworth says the #62W driven by his granddaughter Willow Barberstock had a twist of about an inch from front-to-back in the frame that needed to be straightened. The engine is being freshened and a new body being installed. The car is also getting a new paint scheme and they’re installing new drop spindles to lower the ride height. His own car will get a new body and fresh valve springs on the engine.

Warnes Racing is busy getting 3 cars and engines ready at their shop in Newcastle, Ontario. Rick Warnes is finishing-off a new car for the #90, that will return to its familiar purple. Former series champion Rob Warnes will be making a few updates and will have a new body on the #90 and the machine that carried the #98 in 2016 will have a driver for several events. Brad Stevenson has a brand-new piece for the new campaign and Josh Gruntz will be making a return to the OMRS ranks in 2017.