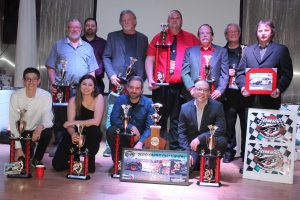 The evening’s presentation began with a sombre tone as spokesperson Rick Warnes acknowledged the contributions of former official and racer Bill Pickford, who passed away midway through the year. Pickford was instrumental in obtaining sponsorship partners and the development and growth of the brand. Bill Pickford will be sadly missed by the provincial motorsport’s community and his Ontario Modifieds Racing Series family and friends.

Tina Rosales of series sponsor GEN3 Electrical announced an annual award in Pickford’s honour would be presented annually, with Kevin Pickford named as the first recipient. Special plaques were also presented to Pickford’s family including Donna Brown-Pickford, Mike & Kevin Pickford. Warnes also confirmed that track promoter J.P. Josiasse will be hosting a Bill Pickford Memorial event during the 2020 season. The tour logo has also been redesigned to incorporate Pickford’s red #61 racecar in its layout.

Looking back at the 2019 schedule, parity was once again the key for the OMRS drivers. While his plans had him running only a limited schedule, former series regular Josh Gruntz scored his first career feature race win at the season opener. Chad Strawn; along with former point champions Dwight Brown and John Baker Jr. also picked-up main event victories during selected dates at Peterborough and Flamborough Speedways.

Just as Gruntz had earned the first checkered flag of his career at the 2019 kick-off, youngster Alex Cuzzilla held-off a strong challenge from eventual titleholder Baker Jr. to score the win during the Saturday, August 31st Championship Clash at Peterborough. It was the inaugural stock car racing victory for the 16-year-old former go-karter from Port Perry, Ontario. The trip to the winner’s circle was the icing on the cake for a consistent season that saw the youngster finish 3rd in the final standings and named rookie of the year. Cuzzilla also took the honour as the most improved driver. 2nd place point finisher Chad Strawn was the recipient of the year’s hard charger award.

During the evening, sponsorship appreciation plaques for GEN3 Electrical, Torque Builders, Bourque Transmission, Conview Company, Sterling Tire, Thinkpath Design and Clarke Motorsports Communications were announced. In his closing remarks, Warnes confirmed plans to have OMRS represented at the annual Motorama Custom Car & Motorsports Expo at the International Centre and spoke of a driver development program that is expected to begin in 2010. Tour officials also took time to thank Terri Strawn, Ashley McCubbin, Jessica Boudreau and Kim Da Ros for their participation with the evening’s event.