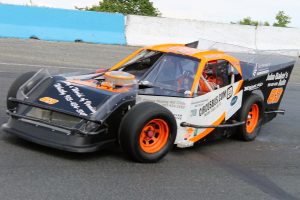 After a few dates on the road, teams with the Ontario Modifieds Racing Series – powered by Torque Builders Inc. – are looking forward to getting back to some familiar territory and will be part of the Championship Clash – Saturday, September 1st – at Peterborough Speedway. Rick Warnes – who along with Randy Hollingsworth and Bill Pickford make up the OMRS team of officials – says it will be great to wrap-up the season at the venue known as Canada’s Toughest 3rd of a Mile Paved Oval.

“For the first time since the series’ inception in 2010, we visited a pair of new tracks west of the GTA,” Rick Warnes said. “For many of the racers on the tour, the only time they’d ever seen the layouts at Sauble or Delaware was when they rolled through the pit gates. Still, I think we gave a good accounting of ourselves and that helped to expose our brand of racing to a new group of fans.”

Heading into the Saturday night season finale at the tight, tricky bullring on Mount Pleasant Road, Warnes pointed-out that there are several teams still in the running for the 2018 championship. Anthony DiBello leads the way, but he’s less than 20 points ahead of reigning title-holder Brad Stevenson and fewer than 25 markers in front of Stevenson’s teammate, Chad Strawn. Former champ John Baker Jr. is within 30 points of DiBello, while Rick Warnes and his son Rob – another prior tour title-holder – are deadlocked in 5th spot in the standings, less than 50 markers back of the leader.

“His previous Thunder Car/Super Stock crowns have shown that Anthony knows how to win; especially at Peterborough,” Warnes continued. “He’s definitely in the running, but the rest of the pack will be hot on his tail and there’s no way they’re going to just hand over the trophy without making things interesting.”

For the Saturday, September 1st event, pit gates are scheduled to open at 12:30, with the general admission spectator grandstands unlocked at 3:00 and the night’s first green flag at 5:00.