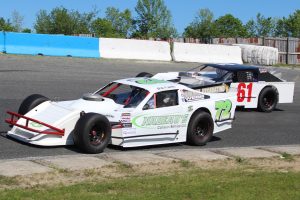 Round 1 went into the record books with a first time main event winner. Saturday, June 22nd, the Ontario Modifieds Racing Series – powered by Torque Builders Inc. and Gen-3 Electrical – pays its second visit of the year at Canada’s Toughest 3rd of a Mile Paved Oval.

“Our teams hadn’t raced together as a group since last year’s Championship Clash at Peterborough so everyone was looking forward to getting the new season underway,” said Randy Hollingsworth, who along with Rick Warnes and Bill Pickford make-up the OMRS set of officials. “It took a couple of weeks longer than everyone had expected, but we were all happy to see each other and get back on the track to put on a show for the fans.”

Hollingsworth says the season opening event had several twists and turns in addition to the ones on the racetrack. The trip to victory lane by Josh Gruntz was the first main event win of his career. There were a few heat race triumphs over the years and one night when he raced at Mosport, they had trophies for the top 3 and he finished 3rd. Dwight Brown’s 3rd place run left him tied for 2nd place in the early season standings. The former series champion is using #61 as a tribute to his stepfather Bill Pickford, instead of his customary #2.