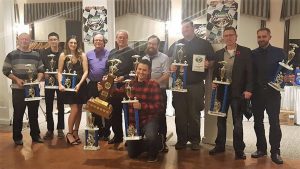 Warnes also made mention of Peterborough, Flamborough, Sauble and Delaware Speedways; the tracks that played host to Ontario Modifieds Racing Series dates this year and said that the tour hopes to return to each venue in 2019.

It was a highly competitive campaign, with the top 2 positions in the standings separated by just 20 points. 3rd and 4th were only 2 points apart, while the father and son duo of Rick and Rob Warnes – who finished 5th and 6th in the final running order – were split by just a single marker. There was just a 6 point difference between 7th place finisher Willow Barberstock and Randy Hollingsworth, who was 9th in the standings.

After running a successful Thunder Car/Super Stock program that included track championships at Peterborough Speedway, Anthony DiBello made the seamless transition to OMRS racing this season and clinched the 2018 title, while also being named the Top First Year Driver. Willow Barberstock, another former Peterborough Speedway champion and Chad Strawn – who scored a pair of wins on the season – shared the Most Improved Driver honours, while former series champion John Baker Jr. took home the Hard Charger Award.