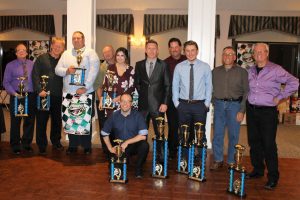 Drivers and teams with the Ontario Modifieds Racing Series – powered by Torque Builders Inc. – gathered Saturday, October 28th at the Harmony Creek Golf Centre in Oshawa to present the season-ending awards from a successful campaign of open-wheeled racing.

The evening’s festivities got underway with an address by Rick Warnes, on behalf of the OMRS group of officials. Warnes extended thanks to the tour’s sponsorship partners including Torque Builders, Complete Mechanical, Bourque Transmissions, Thinkpath Design and Gen 3 Electrical; as well as the promotional teams at Peterborough, Flamboro and Sunset Speedways for their support during the 2017 schedule.

Series point-fund payouts and trophies were handed-out to the top 13 teams in the standings, with special honours given to Connor James and Duane Cinnamon, who were named rookie of the year and most improved driver, respectively.

The Ontario Modifieds Racing Series would like to thank Ashley McCubbin of www.shorttrackmusings.com for helping to prepare photo collage presentations for drivers and sponsors.