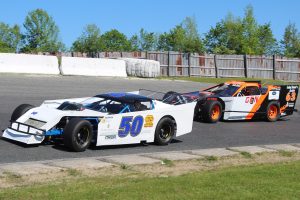 Action has been hot since the drop of this year’s green flag, creating a solid run for the 2019 title. Another exciting schedule for the Ontario Modifieds Racing Series – powered by Torque Builders Inc. and Gen3 Electrical – wraps-up Saturday, August 31st as part of the Championship Clash at Peterborough Speedway. Spokesperson Randy Hollingsworth – who along with Rick Warnes and Bill Pickford make-up the OMRS group of officials – says its been a great season on the tour.

“Our drivers and teams have accomplished a lot and should be very proud of their efforts,” Hollingsworth said. “Just look at the overall standings heading into our final event of the year. The top 2 runners in the title hunt – John Baker Jr. and Chad Strawn – are just 7 points apart, while 16-year-old Alex Cuzzilla – who is in his first full season of open-wheeled modified racing – holds-down the 3rd spot in the standings, less than 50 markers out of the lead.”

During the most recent action for the series, former champion John Baker Jr. swept a pair of main events at Flamboro Speedway; just as Chad Strawn had done earlier in the year. The pair has scored the most feature wins in 2019, with Baker Jr. collecting 4 checkered flags, including 2 in a row at Peterborough earlier this season. Just a single point stands between the 2 drivers heading into the Saturday night finale.

Family is an important component of all motorsports’ genre and the Ontario Modifieds Racing Series is no exception. Rob Warnes sits 4th in the standings, less than 10 points ahead of his father, while Hollingsworth occupies 6th position, a single marker ahead of his granddaughter, Willow Barberstock.

The Championship Clash, featuring the Ontario Modifieds Racing Series – Saturday, August 31st at Peterborough Speedway – has the pit gates opening at 12:30, with general admission grandstands unlocked at 3:00 and racing at 5:00.