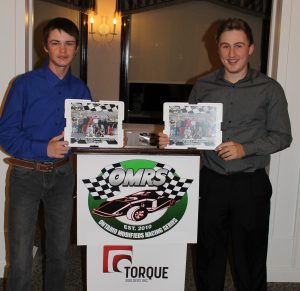 With the Rookie of the Year award presented to Stu Robinson Jr. after a successful first year on the 2016 Ontario Modifieds Racing Series tour, the popular open wheeled tour will see several different drivers compete for the prestigious honour during the 2017 campaign. With new drivers joining the ranks and bringing experience earned in different motorsports genres, Randy Hollingsworth – who along with Rick Warnes and Bill Pickford make up the team of OMRS officials – says the new schedule is already showing plenty of promise.

“Our group has always been committed to putting the best field on the track at every event and our development deals are a great way to find some new talent,” said Hollingsworth. “We have a program in place with J.P. Josiasse at Peterborough Speedway that allows drivers from the 4Fun and Thunder Car divisions to take the next step in their driving careers. The track also allows us to host an annual ‘Test a Mod’ day that has opened the door for racers to get behind the wheel of one of our cars in an on-track practice session.”

After making a few starts late in the year, Connor James is ready to face the challenge of a full season of open wheeled modified racing. The 20 year-old from Bradford, Ontario started his career in Junior Late Models at the age of 10 and won Sauble Speedway’s Junior Late Model championship in 2011. James also got his feet wet in 4-cylinder racing, during the 2014 campaign.

Jaden Chapman comes to the Ontario Modifieds Racing Series with a wealth of experience, including time in endurance and super stock divisions at Delaware Speedway. Teaming-up with car owner Dwayne Brooks who will donate any money won this year to Crohns and Colitis Society research, the 22 year-old Sarnia, Ontario resident – who works as an apprentice at the hometown BMW dealership – will also compete in the Thunder Car division at Sauble Speedway in 2017.

Graduates of the karting ranks, Norwood’s Isaac Delyea and Owen Brooks of Peterborough got their first taste of an OMRS machine during the 2016 ‘Test a Mod’ day at Peterborough Speedway. The pair of youngsters is looking forward to the first green flag of the season for the popular series.