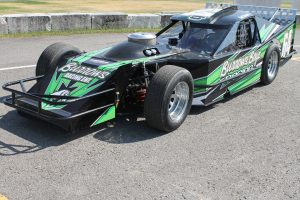 With a pair of events run so far, the Ontario Modifieds Racing Series – powered by Torque Builders Inc. – has seen 2 first-time main event winners find their way to victory lane. Fans of the popular open-wheeled tour will be looking to see if the trend continues when the 2017 schedule resumes – Saturday, June 10th – at Canada’s Toughest 3rd of a Mile Paved Oval.

After a stretch of very impressive showings last season, Duane Cinnamon took the checkered flag Saturday, May 20th at Sunset Speedway, while it was Brad Stevenson’s turn to step into the spotlight at this year’s first Peterborough Speedway event Saturday, May 27th. With the young term’s point standings incredibly close, Randy Hollingsworth – who along with Rick Warnes and Bill Pickford make-up the OMRS group of officials – says its anyone’s race to win.

“We’ve had about a dozen teams take the green flag at each of our shows this year,” Hollingsworth said. “The field is strong and we’re still expecting some new runners to be part of the action in weeks to come. After missing the first 2 events on this year’s tour following his trip to Bristol Motor Speedway, Stu Robinson Jr. is expected to be in the starting line-up at Peterborough.”

Hollingsworth says that with just over 75 points separating the top runners in the standings and the on-track competition incredibly tough throughout the field, it isn’t surprising that there have been first-time winners in season’s opening events.

Ontario Modifieds Racing Series Notebook: As part of the driver development program with Peterborough Speedway, OMRS will host its annual ‘Test-A-Mod’ day prior to the Saturday, June 10th event. From 11:00 ‘til 2:00, drivers from other divisions will get the chance to take some laps in one of the popular open-wheeled machines.