While drivers and teams with the Ontario Modifieds Racing Series, presented by GEN-3 Electrical were looking forward to the dates on this year’s schedule, series officials were hard at work behind scenes making final plans for the inaugural running of the Bill Pickford Memorial.

After being delayed by the cancellation of the 2020 season and again because of an abbreviated 2021 line-up, the tribute to honour the memory of the former OMRS racer and founder will be held Saturday, August 20th at Peterborough Speedway.

“Bill was a well-respected member of the provincial motorsports community and a good friend to drivers and teams at different levels of the sport. We’re thrilled to pay tribute to his contributions to weekly racing,” said OMRS official and spokesperson Rick Warnes. “Our promotional team has put together a program that every driver and team with our group would be thrilled to add to their resume.” 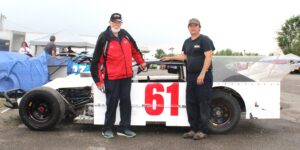 Warnes says the special event will be run as a pair of feature races. The first being 30 laps in length, with the second 31 laps long with the total 61 lap distance representing the car number that Bill Pickford campaigned throughout his career. Teams will be competing for an increased race purse, raised through pre-sold lap sponsorships and a generous donation from Pickford Racing to add some additional prestige to the show. Officials are also looking to bring some contingency sponsorships to the table.

“This event has the potential to be the biggest race in the history of the GEN-3 Electrical Ontario Modifieds Racing Series,” explained Rick Warnes. “We’re committed to doing everything possible to make it a fitting tribute to the legacy of our good friend.”