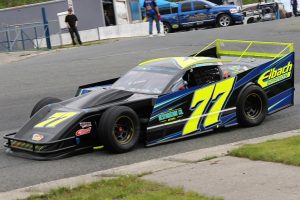 There has always been something special about a first-time main event winner and on this year’s Ontario Modifieds Racing Series – powered by Torque Builders Inc. – tour, the first 3 main events have been taken by drivers making their inaugural visit to victory lane. Duane Cinnamon won the season opener at Sunset Speedway, with Brad Stevenson grabbing the opening round at Peterborough and Mark Gordon scoring the victory Saturday, June 10th at Canada’s Toughest 3rd of a Mile Paved Oval.

“It seems like our talent pool gets deeper at every event,” said Bill Pickford, who along with Rick Warnes and Randy Hollingsworth makes up the team of OMRS officials. “We have new drivers joining the fold and our existing roster has stepped-up their game to create a very strong field whenever we take the green flag.”

Pickford pointed to the recent ‘Test-a-Mod’ day at Peterborough Speedway as a source for some of the tour’s new teams. Drivers from a variety of different divisions – including the karting ranks and the track’s 4Fun field – took a turn behind the wheel of one of the powerful open-wheeled rides and caught the fever of what it would like to run regularly with the series.

The Ontario Modifieds Racing Series will be part of the annual Autism Awareness Night – Saturday, June 24th – at the tight, tricky bullring on Mount Pleasant Road, west of the Liftlock City. Pit gates will open at 3:00, with the general admission grandstands unlocked at 5:00. Racing gets underway at 6:00.