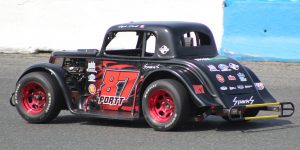 Every driver fans see on the stage of their hometown speedway found their racing inspiration from somewhere. After being exposed to the division early on, Belleville, Ontario’s Nick Portt followed in his father Arnold Portt’s footsteps and in the middle of the Coronavirus Pandemic, turned the first ever laps of his motorsports career with the Ontario Legends Series at Peterborough Speedway.

The 33-year-old – who works as a Lineman with Elexicon Energy in Ajax – booked some seat time with former series and national champion Matt Haufe’s driver development program and saw some improved lap times after each session. Even though he wasn’t able to achieve his goal of running a complete season to kick-off his first year in the sport. Portt says he is thankful for the experience and looks forward to the 2021 schedule.

“We were able to make some great friends and I think working with Matt Haufe and Kevin Foisy was a perfect way to break into the Ontario Legend Series ranks,” admitted the driver. “Kevin is the best when it comes to offering advice and putting a race-winning set-up under the car. I was going over notes with him after each session and found my comfort and confidence levels increase every time I rolled onto the track.”

With the expert tutelage of Haufe and Foisy helping to provide the motivation, Nick Portt managed a 13th place finish in his initial Ontario Legends Series start. Sadly, COVID-19 burst his bubble as the tour ran only one more event before the curtain fell on his freshman campaign. The driver says despite the abbreviated schedule, he was happy to get some track time to develop his skills.

“We spent a lot of our own and our sponsor’s money to get to where we are, but the future looks bright and we’ll be ready next year when the green flag flies,” Nick Portt – who enjoys hunting and snowboarding in his time away from the track – confirmed. “I’m lucky to have some great people like my father, Stan Morrow, Brent Graham, Scott Saunders and Shannon Kirby in my corner to offer their support and encouragement.”

“The close competition with the Legends – as result of spec cars and driver camaraderie – makes it a great series. I always liked the racing, from the early days watching my father and hanging out at the track. It’s great to be part of the tour.”