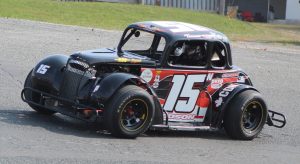 Peterborough Speedway has traditionally brought-out the best in the Trailers Plus Ontario Legend Series. Before the arrival of the Coronavirus Pandemic, the venue known as Canada’s Toughest 3rd Mile Paved Oval was to play host to the 2020 edition of the Canadian Legend Asphalt Nationals. With the entire schedule turned topsy-turvy because of COVID-19, the tour checked-in for a 30-lap main event in Central Ontario Saturday, September 26th.

With Joe Adams and Miles Tyson on the front row, a strong field of 21 starters was scheduled for the green flag. Tyson took the early lead, with last week’s winner Matt Haufe – who started 4th – trapped in the outside line, before slipping into 7th. Nick Ledson took control of the event, with Parker Traves and Tyson 2nd and 3rd before the race’s first caution flag flew for a backstretch issue on lap 9.

Another yellow flag about a handful of laps later led to a restart with Ledson, Haufe, Traves, Tyson and Kevin Foisy in the top 5. Ledson felt the heat from his rivals several times during the 30-lap distance but even a pair of late race cautions – including one with only 5 laps remaining – would make a difference. A late race highlight reel finish, with Ledson’s No. 15N crossing the line backwards while the rest of the pack scattered behind him gave him the win. Tyson, Haufe, Traves and Foisy followed Ledson to the checkered flag. Dawson Drimmie, Adams, Adam Cuthbertson, Nolan Gould, Paul Pierik, Shane Pollack, Mark Griffin, Andrew Massey, Thomas Dunn, Nick Portt, Chris Massey, Jeff Forsey, Wendy Adams and Jeremy Coulter rounded-out the finishing order. Brandon Feeney was unable to make the starting field.