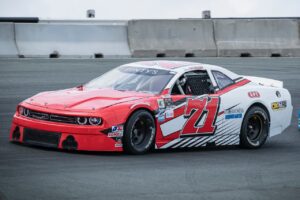 Competing on a variety of ovals, road courses and street circuits across the country, the NASCAR Pinty’s Series is Canada’s National Stock Car racing tour. Saturday, August 27th fans at Peterborough Speedway will have a chance to meet Pinty’s Series driver Bryan Cathcart, see his racecar and take a tour of the team’s hauler.

Based in Springville, Ontario – less than a 20 minute drive from the popular Central Ontario raceway – Cathcart is a veteran of Peterborough Speedway’s Thunder Car/Super Stock weekly wars, scoring the season opening checkered flag in 2013 in his return to the track after a 5 year absence. He also spent 5 years racing on the former CASCAR Super Series.

This year, Cathcart is back in action with the NASCAR Pinty’s Series, after running limited schedules in 2007, 2008 and 2016. The 2022 program for the driver of the No. 71 Cathcart Racing Team is proudly supported by OK Tire – Peterborough and APT/Apsley-Peterborough Trucking.

In his most recent tour start, Cathcart finished 17th during the inaugural Pinty’s 100 at Ohsweken Speedway Tuesday, August 16th. He sits 17th in the point standings after running 8 events in 2022. Close to 40 different teams have run at least one event on this year’s schedule.

On track action Saturday, August 27th will include the home track Jiffy Lube Mini Stock, KOD Super Stock, Late Model, Kingsway Auto Centre Junior Late Model divisions and a 50 lap feature for the Battlefield Equipment Rental Bone Stocks, with Kid’s Bike Races as the intermission feature. Pit gates open at 2:30, with the spectator grandstands unlocked at 5:00 and racing at 6:00. Advance passes can be purchased through the link on the website or on raceday as a cash transaction at the trackside walk-up ticket booth.

Stay up to date with everything that’s going on at Canada’s Toughest 3rd Mile Oval by checking www.peterboroughspeedway.com or visiting the track’s Facebook, Twitter and Instagram social media profiles.