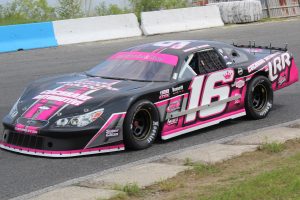 Forecast models showed there was a chance of rain, but Peterborough Speedway officials were optimistic that there would be a good chance to put a good night of racing into the record books – Saturday, June 1st – for the season’s first Summer Toonie Night, presented by Pepsi.

The first group of qualifying heats rolled to the line just after 5:00 and were run off with brisk military precision. All the while, track officials kept an eye on the weather radar and just as the 6th and final Trailers Plus Ontario Legend Series preliminary round was taking its pace laps, the first sign of Mother Nature’s intervention showed its face.

Without a large enough window to allow for track drying and the completion of the show before the arrival of the next weather front, the was ruled complete. The Saturday, June 1st feature events will be made-up at various points throughout the season, as the schedule permits. The next Summer Toonie/Fan Appreciation Night is scheduled for Saturday, July 6th.

Bullring bullet points: Florence Ekman of Cavan, Ontario left the abbreviated night of racing with a 50/50 win of nearly $600.00…Even though the show was called because of weather drivers and teams can be congratulated on running 18 qualifying heats in just over an hour and 20 minutes…Peterborough Speedway officials appreciate the patience of fans during the rain delay.

Next on the schedule for Canada’s Toughest 3rd of a Mile Paved Oval is the Autism Awareness Night – Saturday, June 8th – in support of the Canadian National Autism Foundation. On track action will include the home track Battlefield Equipment Rental Bone Stock, Jiffy Lube Mini Stock, KOD Disposal Super Stock and Late Model divisions; along with the Ontario Modifieds Racing Series season opener. Pit gates open at 2:30, with the spectator gates unlocked at 5:00 and racing at 6:00.

Head to www.peterboroughspeedway.com, as well as the track’s Facebook and Twitter social media platforms for the latest schedule news and information. Search for Peterborough Speedway wherever you pick-up your smartphone apps and take the tight, tricky bullring on Mount Pleasant Road with you wherever you go.