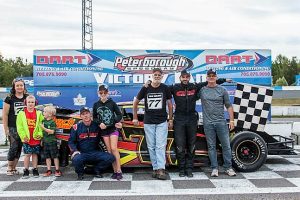 The first feature race action of the night was a 25 lapper for the Ontario Modifieds Racing Series, with Randy Hollingsworth and Chris Mulders on the front row. Hollingsworth led the early stages, before Chad Strawn took over the top spot with 4 laps complete. A 3-wide battle for the runner-up spot was being waged through the second turn but the pace was slowed for a turn 3 caution with 8 circuits on the board. Strawn kept the lead on the restart, as John Baker Jr. moved into second on lap 9. Brad Stevenson grabbed 3rd spot just before halfway, but it was his teammate Strawn who claimed the win. Anthony DiBello and Josh Gruntz completed the top 5.

20 laps of excitement for the Battlefield Equipment Rental Bone Stock division was next, with Alex McGibbon and Rob Crick showing the way. 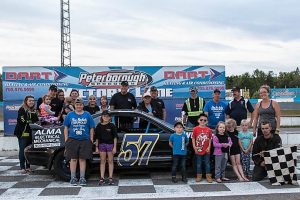 McGibbon got the jump on the field early, with a pair of former track champions – Jeremy Kelly and Ryan Oosterholt – looking for that all important next spot in the running order. Oosterholt used the outside lane to snatch away the lead with 6 complete and caught the back of the pack near the halfway mark. Chris Tubman moved into 2nd, but no one had anything for Oosterholt in the caution-free feature. Jeremy Kelly would hang on for 3rd, with McGibbon and Crick next across the line.

Tubman and Oosterholt each had a pair of wins, with Jeremy Kelly and Shawn Solomon also scoring checkered flags in the preliminary rounds. 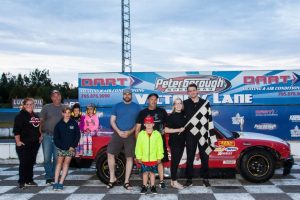 The Trent Lakes Complete Plumbing Renegade Trucks rolled from the staging area with Carrson Hennessy and Jeff Dolley on the front row and 15 laps to settle the score. Hennessy took the early lead and built a huge advantage, with Bill O’Hara moving into 2nd. Ryan Oosterholt struggled with an ill-handling ride contact with the front stretch wall in the second heat race but managed to hang-on for 3rd in the night’s second straight caution free ‘A’ main. Terri-Anne Whittern and Dolley followed the lead trio to the line. 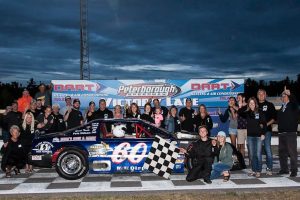 Jacobs took control early, but a yellow with just a single circuit on the board slowed his charge. He’d sprint away again on the restart, with Mark Gordon and Rob Richards hot on his tail. Another yellow flag – this time for a corner 2 problem, with 12 laps complete – gave everyone a chance to regroup. Gordon took the lead away from Jacobs 2 laps after the restart, but the hard-charger – who celebrated his birthday less than a week earlier – quickly stole it back and held-on for his first win of the year. Gordon, Paul Boundy, Marlie Owen and Miles Tyson chased Jacobs to the checkered flag. 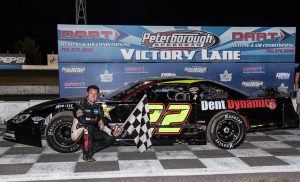 With 30 laps to get things done, Kyle Batty and Mark Gordon brought the Late Model field to the stripe for a feature race to wrap-up the night. Batty took the lead early, but his time at the front was short-lived. Chris Mitchell charged into 2nd and was in control of the field by the time the lap counter showed 3 complete. The leaders caught the tail-end of the field by lap 16, but a half-dozen circuits later, the first and only caution flag waved for an issue in the first turn. Mitchell – a former Autumn Colours champion – took his first win of the year over Amanda Balson, Dan McHattie, Batty and Mark Gordon.

Bullring bullet points: The 50/50 draw in support of the Millbrook Lions Club – worth $736.50 – was won by Valerie Callahan of Bowmanville, Ontario…The OMRS ranks were joined by Ray Anthony, who purchased an open-wheeled machine just a few days before the event. He was looking to get some track time behind the wheel of his #96 ride. Chris Mulders took a turn in Craig Stevenson’s #90M…After a quick trip back home to Bancroft, Tim Burke was scheduled to represent Peterborough Speedway during a Sunday test session for the Canadian Short Track Nationals at Jukasa Motor Speedway.