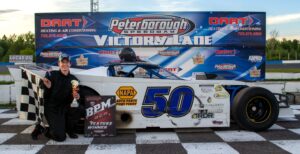 Rick Warnes and Alex Cuzzilla paced the field of Ontario Modifieds Racing Series machines to the line for the opening 30 lap segment of the Bill Pickford Memorial. Cuzzilla took the early lead, with Chad Strawn and John Baker Jr. hot on his tail. The pack started working through the backmarkers with about a dozen laps complete, but not even that would keep Cuzzilla – the reigning series rookie of the year – from taking the win. Strawn, JBJ, Brad Stevenson and Rob Richards completed the top 5.

The first feature event for the home track divisions was a 20 lapper for the Battlefield Equipment Rental Bone Stocks, with Brad Lavalle and Tegan Stanley on the 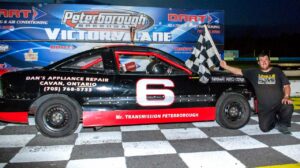 front row. Lavalle and Stanley broke away from the pack, with Sean Kennedy using the outside line in a search for position. His No. 9 car moved into the runner-up spot as the lap counter showed 9 circuits complete. Steve Finnegan – who was back in the car after a week away – took over 3rd and then wrestled 2nd away from Kennedy as the field caught the tail-end of the pack. Lavalle led from the drop of the green flag and held off Finnegan for the win. Kennedy, Stanley and Mark Griffin chased the lead duo across the stripe. 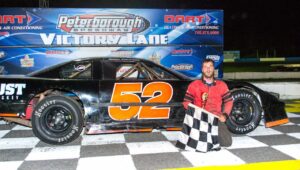 Jacob Mercer and Bobby Cousineau – both previous feature winners earlier this year – led the Late Model field from the staging area to the Great Canadian RV green flag for a 25 lap feature. Mercer’s No. 81 ride was strong early and took the lead with James Townsend and Todd Delisle looking to take their turn at the front. A caution flag with 5 laps complete saw Townsend take the lead on the restart with Mercer now running 2nd. Frontrunners started to put the backmarkers a lap down with less than 10 circuits remaining, but the division’s current point leader couldn’t be caught. Delisle, Dan McHattie and Brandt Graham followed Townsend and Mercer to the checkered flag.

Chris Tubman and Ember Junkin were on the front row as the Jiffy Lube Mini Stocks rolled to the line. Junkin’s No. 19 took the lead from the outside line, with 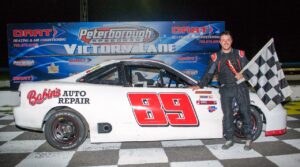 Tubman and Ryan Babin in search of the leader. Babin – who had experienced some mechanical issues earlier in the night – moved into 2nd at lap 16 and was the new race leader a lap later. The driver of the No. 89x machine took the win over Ember Junkin. Tubman and Shawn Solomon were 3rd and 4th. Tyler Junkin – who started scratch in the field – was 5th at the checkered flag. 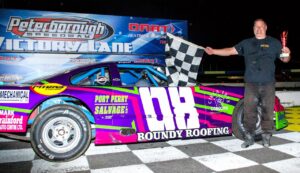 Paul Boundy and Bailey Jacobs introduced the KOD Super Stock starting line-up to the crowd for their feature event. Boundy took the lead at the drop of the green flag, with Jacobs throwing everything but the kitchen sink at the No. 08 machine in an attempt to own the top spot. Yellow flags for a pair of incidents slowed the pace but couldn’t delay the event’s eventual outcome, as Boundy claimed the checkered flag with his first career Super Stock main event win. Jacobs took the runner-up spot, with Mark Gordon, Brandon Feeney and Jeremy Dobb completing the top 5.

The 2nd feature tilt in the OMRS Bill Pickford Memorial event format saw John Baker Jr. and Chad Strawn on the front row. The lead duo, along with Alex Cuzzilla 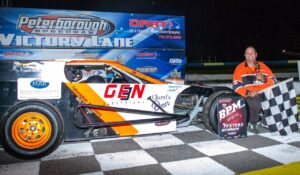 – who took the open round win – were in control from the get-go. A trio of caution flags brought the pack back together, but John Baker Jr. led the entire 31 lap distance and took the win over Strawn and Cuzzilla. Shane Pollock and Bob Franks rounded-out the top 5. With the overall winner decided by total points earned, there was a 3-way tie between John Baker Jr., Chad Strawn and Alex Cuzzilla. Brad Stevenson and Shane Pollock were next in the final standings, tied at 84 points apiece.

Bullring bullet points: The night’s 50/50 prize was claimed by a pit-side ticket belonging to the Junkin Racing team…Dwight Lavoie was back at the controls of Dan Demers’ No. 67 Mini Stock…A pair of former home track regulars Todd Delisle and Brandt Graham made their first starts of the 2022 season in their No. 22 and No. 14 Late Model machines…Cole Burrows made his first career Peterborough Speedway start in the Mini Stock field.

Track owner and promoter J.P. Josiasse would like to thank the venue’s staff and volunteers for their hard work, dedication and commitment to the sport and the facility on a weekly basis.

Local NASCAR Pinty’s Series racer Bryan Cathcart from Springville, Ontario will have his No. 71 car and race hauler on display at the track during the Saturday, August 27th event. Fans will be able to get an autograph from the driver and take a walk through the team’s rig, which is a former NASCAR Cup Series hauler.

Be sure to keep an eye on www.peterboroughspeedway.com and the track’s Facebook, Twitter and Instagram social media profiles for regular season news, information and updates on the 29th annual edition of the Autumn Colours Classic.